Delia Ketchum, also known as Mrs. Ketchum is Ash's mother in the Pokémon anime. She is married to Mr. Ketchum.

According to Takeshi Shudō's novelization, she runs Pallet Town's only restaurant, Pallet House, which she inherited from her mother. When she was younger, she dreamed of becoming both a model and a Pokémon Trainer, but abandoned those dreams to run the restaurant after Ash was born.

Delia made her debut in Pokémon - I Choose You!, telling Ash that he should get to bed for his big day tomorrow. She was then seen in front of Professor Oak's Laboratory with a small group of people from Pallet Town, cheering Ash on as he walked out with his first Pokémon. She was shown to be very sad that her little boy was growing up, but quickly put it aside to tell him everything that she had packed in his backpack for his journey. When she unintentionally insulted Pikachu, who was already upset at getting Ash for a Trainer, he used his ThunderShock and shocked the entire group.

She was seen again in the the next episode when Ash decided to call her while waiting for his Pikachu to be healed by Nurse Joy. She seemed to be surprised that he was already in Viridian. She also mentioned his father, saying it took him four days to get there when he began his Pokémon Journey. Also mentioning his father would be proud of him, she commented that he was the apple of his eye. When he continued to shoot down her words of encouragement, she became angry and scolded him by telling him that he can do anything he set his mind to.

She appears again in It's Mr. Mime Time, watching a performance of the Pokémon Circus. She watches what appears to be a Mr. Mime, but is actually Ash in a costume. This is revealed to her when Ash fights Team Rocket, later stealing their balloon. Later, she invites Brock and Misty over to her house for lunch. A wild Mr. Mime that Ash, Brock, and Misty saw at the beginning of the episode taps on the window, and Delia thinks it's Ash. She lets "Ash" in for a snack, but then the real Ash appears, revealing to Delia that the Mr. Mime isn't fake. Ash asks Mr. Mime to help him, and Delia encourages Mr. Mime, offering it a big dessert. Later, when Team Rocket steals Pokémon with a tank, she has the wild Mr. Mime stop Team Rocket. Stella's Mr. Mime and the wild one build a brick tower around the tank, so Team Rocket fires a missile, but it rebounds and sends Team Rocket blasting off. At the end of the episode, the wild Mr. Mime, whom Delia has nicknamed Mimey, stays with her.

Delia next appeared in Showdown at the Po-ké Corral. Ash greets his mother in the kitchen, and tells her that Mimey vacuumed his face, to which she responds that Mimey cleans dirty things. She also tells him that Mimey only listens to her. Later in the episode, Team Rocket (as a news crew) appears at her house, claiming that they want to have an interview with Ash, but Delia tells them that Ash is at Oak's laboratory.

In The Evolution Solution, Delia went to the Seafoam Islands with Ash and his friends.

In Make Room for Gloom, she tells her son to help out in the garden, but Ash says that he has to do some "serious training" in the mountains. She tells him and his friends to get 3 to 400 pounds of fertilizer from the Xanadu Nursery.

In Go West Young Meowth, she goes to Hollywood with Ash and his friends. They are the only ones who watch the premiere of Cleavon Schpielbunk's new movie, Pokémon in Love, which was filmed in the previous episode.

She reappears in A Friend In Deed. She is standing outside a restaurant in the Indigo Plateau with Prof. Oak, where she meets Ash and his friends. She cooks in the restaurant (to the confusion of the cooks). When she has cooked for them, they sit down to eat and talk. Later, she is stuck in the elevator with Ash, his friends, Prof. Oak, and Ritchie when Ritchie and Pikachu save them.

In Friend and Foe Alike, she watches Ash's round five battle against Ritchie with Brock, Misty, and Prof. Oak and wonders why Ash isn't there: he has been kidnapped by Team Rocket. She is relieved when he shows up.

In Friends to the End, Delia worries about Ash, as he won't get out of bed.

Delia is seen 35 episodes later, when she arrives at her house and finds Ash, Misty, Brock, and Tracey there. She tells Ash, Misty, and Tracey that she found Brock on the ground in a field of grass. She let him stay at her house, and he has been doing chores for her. They discuss dinner, and when Ash shows her his trophy, she says she could use it as a dumbbell. Later in the episode, she and Mimey pack things into Ash's backpackbecause he is going to Johto for the Johto League. The next day, Ash leaves for Johto.

Her next appearance is in Saved by the Beldum, watching Ash light the League torch.

In the next episode, she wonders what she'll cook for dinner. The doorbell rings and Mimey answers it. Delia goes to the door and finds May and herBulbasaur, Combusken, and Munchlax. Later, May and Delia go to Professor Oak's laboratory. They go downstairs and have tea. Ash tells everyone about the Battle Frontier: it's set across Kanto, with seven Frontier Brains, who are like Gym Leaders in that they give out a Frontier Symbol upon being defeated. Delia says that there are Contest Halls in Kanto, which excites May. Ash says that he will be leaving the next day. Afterwards, Professor Oak asks Delia if she's worried about Ash leaving on another journey. She says that she isn't. When Team Rocket tries to steal Ash's Pokémon again, Delia and Professors Oak and Birch run out of the lab. Delia stops Professor Birch from helping Ash and his friends from getting their Pokémon back, saying that it's their fight. When Team Rocket blasts off, Delia says that she knew they could do it. Later in the episode, Delia says her goodbyes to Ash as he sets off on another journey.

In Home is Where the Start Is!, neither Delia nor Mimey aren't in Ash's house when he comes back from his Battle Frontier journey. He goes to Professor Oak's laboratory, and he can't find the professor or Tracey. When he enters the sitting room, Tracey, Mimey, Gary, Delia, and the professor appear and welcome Ash home. Delia is presented with all seven of her son's Fontier Symbols. Soon, Ash challenges Gary to a battle and he accepts. Delia watches the battle between Pikachu and Gary's Electivire, which Gary and Electivire win. After Gary leaves for Sinnoh, Ash announces that he will go to Sinnoh as well. That night, Delia sews.

Ash receives his new clothes that Delia made for him in When Pokémon Worlds Collide!. Delia is not seen again in the whole of the Diamond & Pearl series. However, she appeared in Strategy Begins at Home!. She also made a cameo appearance in the ending credits of Giratina and the Sky Warrior, where it was shown that Ash sent her a bouquet of Gracidea flowers.

She is seen again in the first episode of Best Wishes series. She goes on a trip to the Unova region with Professor Oak and her son by plane. The plane docks at a pier, and after they get off, Pikachu senses something and turns around. He looks up at the large dark cloud overhead. Delia is seperated from her son after Team Rocket tries to capture Pikachu but fails when their machine is destroyed by lightning. Ash and Pikachu are pulled into the storm. They wake up on the ground with Delia and Professor Oak by their side. Professor Juniper drives up and gets them to Nuvema Town.

In the next episode, Ash departs on his Unova journey.

She is next seen in the last episode of the Best Wishes series. In her house, she welcomes her son home and takes his laundry. She says that by the look of Ash's backpack, he certainly did his best. While Ash is at Professor Oak's laboratory, she sews. Later, during dinner at her house with her son, Alexa, and Professor Oak, Ash decides to go to the Kalos region next. Delia leaves suddenly, and everyone worries that she's upset. However, she returns soon with a smile and new clothes for Ash, wishing him good luck. The next day, after Ash's plane leaves, in the airport, Delia says that Ash is always ready for adventures, and that's how boys should be. At the end of the episode, she is shown with a picture of Ash and all of his Pokémon. 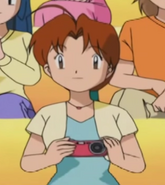 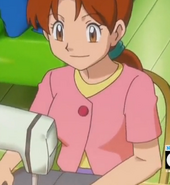 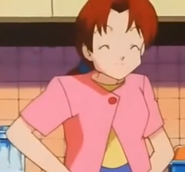 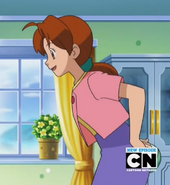 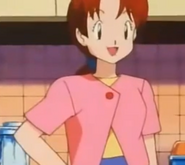 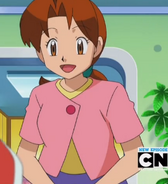 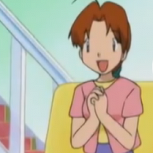 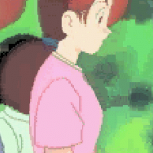 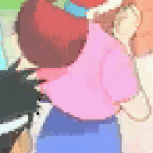 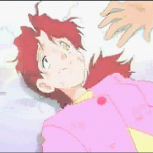 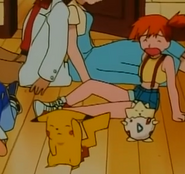 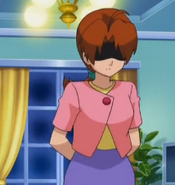 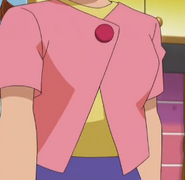 Add a photo to this gallery
Retrieved from "https://xianb.fandom.com/wiki/Delia_Ketchum?oldid=371483"
Community content is available under CC-BY-SA unless otherwise noted.