Denise is the girl that Brian Griffin meets while picking up Peter Griffin from the police station in "Tiegs for Two". She is a Democrat who often partakes in protests. Although Brian has a keen interest in her and states that he loves her, Denise turns down a date. But later, she gives Brian a second chance. Due his newly received tips from a class taught by Glenn Quagmire, Brian blows it and Denise walks out on him. After Brian scolds Quagmire for causing his efforts to backfire, Quagmire states that his class was for picking up random girls for sex, rather than a love interest.

Denise was voiced by Jessica Stroup. 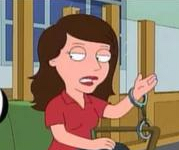