Start a Wiki
Desiree is a ghost who travels the world granting anyone's deepest desires (wishes and desires expressed verbally i.e. "I wish..." or "I want..."). However, the wishes usually have disastrous results or consequences. The more wishes she grants, the more powerful she becomes.

Prior to her life as a ghost, Desiree was a harem girl who won the heart of a Sultan. He promised to grant her all of her heart's desires and even a kingdom of her very own. However, she was cast away from the palace by the Sultan's jealous wife. Dying of a broken heart and old age, Desiree wandered around as a ghost, forever stuck granting whatever wishes people desire. When her origin is being told, it appears that she wasn't evil at first, but eventually grew bitter and envious of her "masters'" happiness, and apparently decided to have wishes end up turning against the wisher.

At some point in history, her spirit somehow ends up in a genie's bottle and is on display at a swap market. There, a little girl accidentally frees her when her balloon's string knocks down the bottle. When Desiree is freed, she grants the girl's wish for cotton candy, thus producing a tidal wave of it that destroyed the market, much to the delight of a dentist. The moment she appears, Danny fights her and uses his ghost ray for the first time to blast her away.

Afterwars, she continues granting other wishes: Dash turning into a Hulk-like creature to crush the other football team, Paulina turning into a cute and popular anime character named Sayonara Pussycat (a parody of Hello Kitty), and giving a surfer's car the uncontrollable power of flight (causing the surfer to conclude he's hallucinating). When Tucker, who is jealous of Danny's powers, wishes for ghost powers, she gives him powers that consume him and turn him evil. A rivalry between him and Danny then takes place as Tucker begins to become more ghost-like. Eventually, Danny captures Desiree by wishing her to disappear into the thermos, along with saving Tucker.

She has a brief cameo in "Prisoners of Love" as one of the many ghosts in jail. She helps Danny to escape from Walker's Prison.

Return to the Wish Business

She later gets another starring role in "Memory Blank" when she arrives in time for the meteor shower, in which many people will be making wishes. She first destroys a sale of non-environmental trucks when Sam wishes for it by giving life to a giant fake cow. Then, when Sam inadvertently wishes for something bad to happen to Paulina, Desiree brings the Trinity of Doom to life as a trio of evil ghosts to hunt and kill Paulina. When Sam wishes she never met Danny after they had a fight, Desiree grants it and creates a world where Danny did not know Sam, thus never gaining his ghost powers that Sam partially caused him to gain. Sam struggles to get Danny his powers back, and after she recreates the accident, a now inexperienced Danny Phantom tries in vain to control his "new" powers to stop Desiree, who kept getting stronger due to the vast amount of wishes being made during the meteor shower. Sam finally wishes to take back the wish she made prior, causing Danny's memory to be restored and to once more seal Desiree, through which she remarks, "I have got to stop granting every wish I hear!"

She has another small cameo in "Reign Storm" when Skulker led millions of ghosts out of the Ghost Zone.

She returns again in "The Fright Before Christmas" as one of the many ghosts who help Danny save Christmas.

Saving the Earth and the Ghost Zone

She is seen briefly in the series finale "Phantom Planet", first getting attacked by Vlad's ghost hunting team The Masters' Blasters and then helping Danny, Skulker, and millions of other ghosts turn the entire planet intangible so that a massive asteroid could pass through it.

Desiree remains a rather vindictive genie, probably due to her own tale of tragedy and being broken hearted. Her wishes reflect this; giving off grave consequences beneath the wishes the people make, similar to the story of The Monkey's Paw. It's possible she's merely taking out her anger over her loss onto the people whose wishes she grants. Her love tragedy also gives her a rather low opinion of men; she refuses to let any man touch her unless she wishes it. Sometimes she would use wishes people make to her advantage. 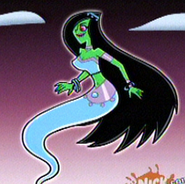 Add a photo to this gallery
Retrieved from "https://xianb.fandom.com/wiki/Desiree?oldid=257356"
Community content is available under CC-BY-SA unless otherwise noted.