Wonder Woman is an Amazonian princess and a superheroine. She was a member of the All-Star Squadron, and became a founding member of the Justice League. She is the mentor toWonder Girl.

Wonder Woman is a noticeably tall and fair-skinned woman with straight waist-length black hair and blue eyes. She is ageless and attractive in appearance, sporting a slender yet curvaceous frame with a sizeble bust and lean yet well-muscled build. She wears a strapless red bustier held up by a brace of gold resembling two W's. She has a large golden belt, and blue briefs with five white stars on them. She wears red boots with a white stripe on the front side.

Wonder Woman wears silver bracelets around her wrists, red star earrings, and wears a golden diadem with a red star on her forehead. She also has a golden lasso, which hangs from her belt when not used.

Due to the fact that she is Amazonian royalty, Diana seems to naturally come off as a powerful and commanding presence to those around her. She is serious-minded and outspoken in her views.[7]

Her current residence is Washington, D.C.[8]

Wonder Woman came to Cadmus with the rest of the League after it was destroyed. She talked to Supermanafter he was confronted with his clone.[11]

Wonder Woman attended the funeral of Kent Nelson at the Tower of Fate.[12]

Wonder Woman took part in a League meeting concerning the admission of new members. She was a vocal proponent of Icon (but moreso Rocket), as she felt the League needed more women. She was angry atCaptain Marvel for lying about his age, and was disapproving of Batman's education of Robin.[7]

Wonder Woman was present at the press conference about the induction of Atom, Doctor Fate, Icon, Plastic Man and Red Arrow into the League.[14]

After being made a slave of the Light's mind control, Wonder Woman welcomed Vandal Savage aboard the Watchtower with a silent kneel of obedience.[14] In the time she was enthralled, the Light used her and five other Leaguers to attack Rimbor. For sixteen hours, they went on a rampage, and told all present to beware the Justice League, and Earth.[15]

Wonder Woman was one of the six leaguers on an away mission who was recalled to the Watchtower. This was Vandal Savage's response when the Team successfully disconnected Plastic Man, the Atom, Captain Atom, and Hawkman from Klarion's control. Upon her arrival, Wonder Woman and her five teammates faced off against the vaccinated Black Canary, Red Tornado and Red Arrow. When Red Tornado was incapacitated byJohn Stewart, Wonder Woman, along with Superman, tore off Red Tornado's limbs, removing him from the fight.

Wonder Woman had pressing issues on Themyscira, which prevented her from investigating the disappearance of Helena Sandsmark.[17]

After being acquired by Kylstar as an asset, Wonder Woman was stored in a crystalline prison cell with all captured heroes and villains. An inhibitor orb blocked her powers.[18]

The heroes discussed what to do next. Captain Marvel suggested freeing Major Force, which Captain Atom did not like. Wonder Woman tried to convince him otherwise, reminding him of their friendship, but he still refused. Captain Atom pulled rank and decided they should have to find out more about their captor first.[18]

The heroes came to a window and discovered, to their dismay, that they were being held captive on the Moon. Wonder Woman noted getting home may be more difficult than their escape.[19]

The heroes had difficulty getting their bearings in the crystalline corridors. Captain Marvel came up with a plan to find the teleporters that brought them to the Moon, but the next moment the group was teleported inside a cell. They were addressed by Orb-One, providing translation for First Leader Kylstar, who told them they would remain where they were during their journey. Kylstar's ship then lifted off from the surface of the Moon and headed into space.[19]

The heroes waited patiently in their cell.[20]

Failing to convince First Leader Kylstar that they do not want to accompany him on his journey, the heroes pummeled the ground beneath them, and ventured their way through the vessel. The heroes were immediately teleported to a new destination in the vessel, along with Kylstar and Orb-One.[20]

The heroes were quickly trounced by Kylstar, who slammed Wonder Woman to ground. Kylstar prepared to deliver the final blow, but Superboy prevented that.[20]

Wonder Woman rose, realizing their tactics had been flawed. She rallied her teammates, and urged them to work together.[21]

With her lasso, Wonder Woman restrained Kylstar, and kept him tied up with Captain Marvel's help. The others performed the West Maneuver on him. Just when they thought they had beaten him, Orb-One summoned new restraining orbs. These new orbs were better adjusted after the previous escape, disabling their powers more effectively.[21]

Miss Martian arrived and liberated the heroes from their controlling orbs.[22]

Having seen the prowess of his acquisitions, Kylstar decided to explain his actions to all of them. He had all the captives released, and explained how he needed them to save his people. A few chose to join him; the rest were teleported away.[22]

The heroes and villains were teleported straight into the control room where Alpha Squad was fighting the Collector of Worlds. The Bio-Ship's weapons made quick work of the coludroid.

Just as they were planning to regroup, dozens more coludroids showed up and surrounded the heroes and villains. At Atom and Nightwing's insistence, the Collector shut down his shrinking beam, as someone below attempted to shut down the force field.[22]

Wonder Woman gathered with the other Leaguers, and watched as Nightwing, Captain Atom, Superman and others discussed the coincidence of two alien incursions on the same day.[22]

After the Gamma Squad saved hostages from the Kroloteans, Wonder Woman arrived on the scene with the rest of the Justice League members and the Team.[4]

Wonder Woman joined Captain Atom, John Stewart and Nightwing at STAR Labs, to wait for Zeta Squad's arrival back from Rann. She was shocked when Miss Martian told her what had happened during the sixteen hours she had been under the Light's mind control, and felt guilty for her actions, as she had no memory of it. Captain Atom reassured her it was not her fault.[15]

The League and the Team sought out the main Krolotean base on Earth: Malina Island. Wonder Woman was part of Delta Squad with Wonder Girl, Superman and Superboy. They served as backup, and arrived in the thick of the battle to relieve Aquaman and Lagoon Boy. Wonder Woman quickly set to work, but she soon found she had to reign in the overexcited Wonder Girl, who was unfocused because of her admiration for her mentor. It helped, and Diana watched with pride as Wonder Girl took down two Mechs with her lasso as she had done.

When word reached them a bomb had been planted on the island, Wonder Woman and Wonder Girl helped in the evacuation. They picked up Aquaman and Lagoon Boy, and escaped to the Bio-Ship. Superman had opted to stay behind, trying to convince the Kroloteans to escape their impending doom. The Bio-Ship only barely escaped the blast, but Superman was caught in the thick of it. After Aquaman pulled him out of the water, Wonder Woman checked to see if he was wounded.[15]

John Stewart had discussed the events on Rimbor with the Guardians, and they decided the best solution was for the six implicated Leaguers to stand trial on that planet. Wonder Woman prepared for the journey on the beach at Mount Justice's foot, and bade farewell to Wonder Girl, who wanted to come along. Wonder Woman suggested that Wonder Girl's mother would not be happy with that idea. Then Wonder Woman departed with her comrades, offering a parting blessing from the gods.[15]

L-Ron showcased an image of Wonder Woman to Despero, as one of Earth's most powerful beings that could be challenged for a match. However, he moved on to other prospective contenders, due to Wonder Woman's absence from the planet.[23]

Wonder Woman watched on as Superman pleaded his case to the Tribune.[24]

Wonder Woman and the other Leaguers were found guilty of all charges and taken away. Superboy, Miss Martian and Adam Strange arrived in court, presented new evidence and argued the Tribunal should reverse its decision. After further deliberation, the charges against Wonder Woman and the Leaguers were dropped and they were released from custody.[25]

As Wonder Woman and the other Leaguers walked the streets of Rimbor, ready to return to Earth, Vandal Savage broadcast a message through holographic monitors, declaring Earth off limits to alien invasion. Superman was skeptical about Savage's threat, but then Batman pointed to a giant satellite, the Warworld, passing through Rimbor.[25]

The League finally arrived at Mount Justice, Wonder Woman among them. The mountain was in ruins, and Superman wondered whether they were already too late in dealing with the invasion that embroiled the Earth before and during their absence. Members of the Team descended from the heavens, acting as a welcoming committee. Batman asked Aqualad, who in their last meeting was still a traitor, what happened there. Aqualad reassured them that the crisis has passed, but not without loss.[25]

When the Team was summoned to the mission room for a face-to-face meeting with members of the League, Wonder Woman was among them. Batman informed them that they would now operate side-by-side with the Justice League from the Watchtower. Not because Mount Justice was destroyed, but because they earned the right to do so. The League then left the Team to its own devices.[25]

Wonder Woman at times expressed her disapproval of some of Batman's actions, such as how he raised Robinto fight crime from the age of nine. She also did not seem pleased that he kept Captain Marvel's true identity from the rest of the League.[7]

Wonder Girl is Diana's protégé, and she takes the tasks of a teacher seriously. She occasionally has to correct her apprentice's lack of focus and worship of her mentor, but takes great pride in seeing her accomplishments in battle.

Background in other media 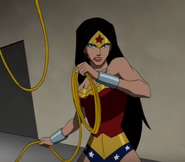 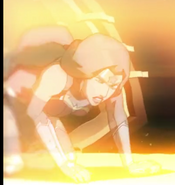