A member of the Justice League.

Torn between a mission to promote peace and her own warrior upbringing, Wonder Woman fights evil while hoping to unlock the potential of a humanity she doesn't always understand.

During her childhood, Diana encountered a Cyclops. Wonder Woman also responded to a distress call at Stryker's Island Penitentiary. She arrived just as Superman starting fighting Parasite. She caught Parasite in her Lasso of Truth then bashed him into the ceiling to knock him out. Suddenly, Calythos of the Brothers Djinn crashed into the police van holding Parasite. Wonder Woman took Jimmy Olsen to safety. She was surprised to see Superman mourn for Parasite. He reminded her Parasite was a living being but detected a heartbeat. Calythos revealed himself. After rattling the island with a minor quake, Calythos jumped to Metropolis. Wonder Woman followed him to the Mid-City Park and attacked, unaware he was absorbing her power. She managed to get him in the Lasso of Truth and reveal his plan to raise a volcano capable of burying the planet in magma and restore it to its pre-human glory. He yanked the lasso, headbutted her, and drop kicked her into a car. Superman arrived and took a shot at fighting him. Wonder Woman lassoed Calythos' schimitar and threw it into the sea.

Calythos was enraged and hit her so hard she went flying into the side of the Daily Planet's globe. She was nearly drained of her power and could barely stand. Superman admitted as much. Jimmy Olsen informed them he recorded footage of Calythos absorbing Parasite and was using his powers. Wonder Woman and Superman came up with a plan to trick Calythos into stealing Martian Manhunter's powers. The djinn would essentially defeat himself raising the volcano because of the Martian's weakness against fire. Wonder Woman declared a warrior relied on their heart and experience then attacked Calythos with Superman. He easily beat them back then Manhunter stepped in. Calythos took the bait and succumbed to the fire around him. Wonder Woman consulted with Mount Olympus and confirmed the Brothers Djinn ruled primordial Earth and wanted to revert back so they could rule again. She shared her findings with Batman and Superman at the Hall of Justice but was weirded out when Batman formed a creepy grin.

Wonder Woman observed the security monitors and saw Batman get flipped by Booster Gold. She knew that wasn't the real Batman and went to the training area. She drew her sword on Batman and attacked. He dodged her every attack. She threw her sword through a punching bag. He threw the sand that spilled out in her face then threw out some smoke bombs. He stole the Lasso and tied her up in it. Powerless, Wonder Woman fell to the ground. Booster Gold eventually regained consciousness and reviewed his old sparring session files. Wonder Woman pointed out Batman took more than one punch this time. Booster wasn't so sure that was the difference and asked her what she was doing. She heavily hinted he should be untying her. After the Hall collapsed, Wonder Woman emerged from the rubble and noticed the base's power core. She lassoed it and flew up up then hurled the core into Uthool. The explosion safely freed Batman. She caught him then lassoed Uthool. Wonder Woman mused a new headquarters would be for the best rather than rebuilding.

Batman, Superman, and Wonder Woman chased the last three of the Djinn as they flew towards Calythos' second volcano. Nyorlath cast a spell that took Superman and Wonder Woman's powers away temporarily. Batman turned his cape into a glider and made a hard landing with them. With no other choice, he activated the distress signal on his belt. Constantine answered the call and opened a portal. They found themselves in Constantine's House of Mystery. Batman explained the situation and stressed they needed to stop the Brothers from reopening Calythos' fissure. He didn't care for Green Arrow's plan and went through a portal to go get back up. Wonder Woman pretended to be Swamp Thing. Green Arrow's plan worked and the Brothers were defeated. However, Black Adam came out of the fissure stronger than ever. Once Batman and Shazam arrived, Adam transformed the Brothers into monsters. Wonder Woman took on Nyorlath alone. He broke his teeth after trying to bite on Wonder Woman's bracelet then was punched into Constantine's portal. The League banded together and defeated Black Adam. Wonder Woman decided the volcano would serve as the location of their new base, the Watchtower.

During the attack on the Hudson Nuclear Power Plant, Wonder Woman was halfway across the world in the middle of a battle. At the conclusion of the incident, Wonder Woman admired Firestorm for being powerful enough to stop the Nuclear Family but compassionate enough to find a solution that spared their lives. Wonder Woman and Superman went into space to locate the Joker after he was kidnapped by Mongul. She thought it was justice served if Joker became an alien science experiment.

Wonder Woman flew a spacecraft and engaged the cruiser's defenses. Once she secured the perimeter, Wonder Woman boarded the docking bay and thrashed several warriors with ease. She later discovered the Joker aboard her spacecraft trying to figure out the controls. She lassoed his head. Back on Earth, Wonder Woman tossed the Joker into one of the Gotham City Police Department's wagons as he offered his services for the next Justice League holiday party. Superman and Wonder Woman were on-scene when Chronos was arrested by the Gotham City Police Department. Wonder Woman was surprised to hear Batman tell Blue Beetle he did a good job. She admitted she saved Batman's life twice and he never said that to her.

Wonder Woman was Toyman's second choice in "Blvd Brawlers 2 JLA" after he lost to Cyborg with Superman. Wonder Woman petted a dove while on Themyscira then threw off her toga and jumped into the Batcave level with a piece of pillar. She declared, "In a world of ordinary men, I am Wonder Woman!" She kind of liked the catchphrase. Wonder Woman and Batman traded blows as the chibi Batman doll Cyborg interfaced with closed in on Toyman's console. Toyman activated her Super Move, Amazon Rolling Thunder. She lassoed Batman and leaped back to Themyscira then slammed Batman to the ground. Cyborg wanted another character but Toyman declared the game was over. Cyborg protested and called Toyman a big bay. He walked Cyborg over to Wonder Woman. She was about to punch him out but the Batman doll overrode Toyman's controls and freed the heroes. Toyman tried to run away in a mech suit. Wonder Woman lassoed the mech's left and ripped it off.

Wonder Woman agreed to go on a dinner date with Superman in Metropolis in their respective civilian alter-egos. She admitted Steve Trevor was only in love with Wonder Woman while Diana Prince was as invisible to him as her jet. Clark Kent admitted as much with Lois Lane. Dessert and a kiss were interrupted by the appearance of a new menace calling himself Repulse who could repel any attack. It turned out to be Lex Luthor who lured Superman into battle to infect him with his Repulse nanobots. Now posing a danger to the world, Superman flew to space. Wonder Woman and Hawkman questioned Luthor at his cell on Stryker's Island but he wasn't cooperating. Wonder Woman used her Lasso of Truth to force him to reveal what Repulse was and to figure out how to get rid of it. The power of a black hole was decided on. Luthor attempted to blast Superman all the way into Black Hole XT-357 but he, himself, fell in after a meteor collision. Wonder Woman threw her lasso inside and pulled them out. Once their date resumed, Diana declined to kiss him after smelling the garlic risotto on him. 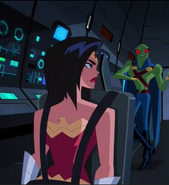 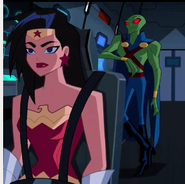 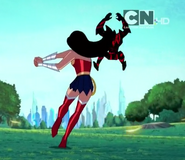 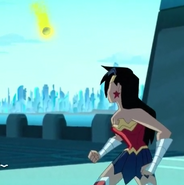 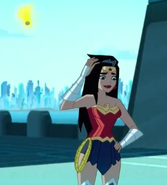 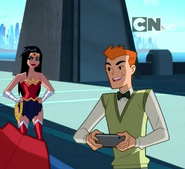 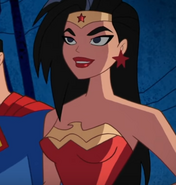 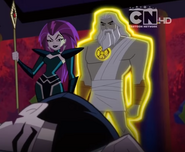 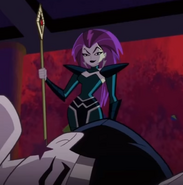 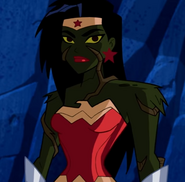 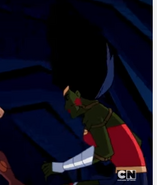