Humans
Diane Simmons (née Seidelman) was Tom Tucker's co-anchor on Quahog 5 News and eventually became a murderer. Although when the series started, she and Tom seemed to have a healthy and at times possibly sexual relationship, that quickly changed to where they instead bicker a lot on the air, and she soon became the butt of his jokes. This relationship started spiraling around the time of her 40th birthday. She also hosted a talk show calledDiane!, on which the Griffins were guests and exposed their secrets. The show was first seen in "Fifteen Minutes of Shame".

In "Patriot Games", it was revealed that she once had a husband, before he committed suicide, as commented once by Tom on the air, causing her to break down crying. She admits to being a bit of a bigot, such as once openly joking on the air that she is racist against black people, though she believed they were off the air since Peter Griffin had cut off Quahog's television signal. During the Special People's Games in "Ready, Willing, and Disabled" she and Tom commented together how watching the game would give them all a sick sort of laugh, and how all of them were most likely going to hell for it.

In "The King Is Dead", it was revealed that Diane's maiden name is "Seidelman". Simmons is also a dedicated actress having done some pretentious student films in college. At one point, she was set to play the role of Anna in The King and I having stolen the role from Loretta Brown, during Lois Griffin's first theatrical production. Unfortunately, Peter Griffin, who stole control of the show from Lois as producer, later changed the script so massively much that even Diane couldn't stand the direction the show was taking and quit. Peter took over the role personally, turning Anna from a British female school teacher, into a male, cybernetic assassin from the future.

In the Family Guy Video Game!, Diane is seen trying to flirt with Joe Swanson.

In "And Then There Were Fewer", Diane reveals she has turned 40, and becomes the murderer of James Woods, Muriel Goldman, Derek Wilcox, Priscilla and Stephanie. She explains her plan to murder Woods and frame her co-anchor, Tom Tucker, to Lois, nearly murdering her as well. It was revealed that she dated Woods and Tom successfully convinced the network to replace her at the news desk, as well as Woods dumping Diane, which resulted in Diane to seek vengeance. However, before pulling the trigger, she is shot and killed byStewie and falls off of a cliff to her death; Stewie then declares only he is allowed to kill Lois. In a message on his Twitter account, Seth MacFarlane confirmed that Diane and the other characters that were killed are dead. 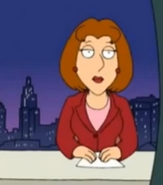 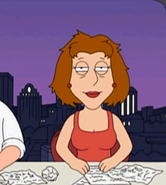 Add a photo to this gallery
Retrieved from "https://xianb.fandom.com/wiki/Diane_Simmons?oldid=367681"
Community content is available under CC-BY-SA unless otherwise noted.