Robin is the leader and one of the five founding members of theTeen Titans. Before that, he was trained by, and served as sidekick to Batman. He is also Starfire's main love interest and later becomes her boyfriend.

Robin was at the Titan Tower. He had a discussion with Starfire about lightspeed travel. After finding out the their refrigerator was filled with blue and furry food, Robin went with the other Titans to a pizza parlor. When he and his teammates went outside, they stumbled across three H.I.V.E. Academy students.

Robin fought alongside his teammates and managed to put up a good fight, before a hole began to open in the midst of the battle. The hole's size was massive and Robin accidentally fell in. After his teammates regrouped, they discovered that Robin was missing.

It is unknown how Robin managed to get out of the hole. However, he did and regrouped with the rest of his teammates. He came up with a plan to retake the Titan Tower, which in his absence had been taken over by the H.I.V.E Academy students. He and the others invaded the tower and attacked the three. Robin grabbed Gizmo by the neck and tried to interrogate him.

Robin was able to obtain the name of "Slade" during his interrogation of Gizmo. Having no idea who this "Slade" was, Robin was anxious to find out. After defeating the H.I.V.E Academy students and retaking the Titan Tower, Robin stayed concerned about the identity of Slade.

Luckily, Robin convinced her to stay before Starfire was attacked by the alien probes for the third time. After wondering what they might want, the alien probes revealed they were looking for a Tamaranean thief. Robin believed they most have been talking about Blackfire, who then tried to leave the planet. He watched as Starfire fought her sister and watched as the Centauri police captured Blackfire.

Robin fought Cinderblock with the rest of his teammates. He used a maneuver called "The Sonic Boom" alongside Cyborg to stop Cinderblock from escaping. However, when their plan failed Robin started to argue with Cyborg. Robin watched as Cyborg quitted the team due to his jealousy and anger towards Robin always making orders and rules for him and his teammates to follow.

At first, Robin did not care at all about Cyborg leaving. However, after having to perform some of Cyborg's chores he started to regret the argument the two had and to top it all of, he had no one to play video games with. Robin watched as Beast Boy, Raven and Starfire became saddened over his leaving of the team as well. However, Robin knew he could not allow his team to fall apart over the leaving of a single member and tried to maintain a grip on everyone.

Later, he went to confront Plasmus at a waste plant. He and the other Teen Titans attacked him, but watched as he separated into smaller pieces. As Robin heard of Cinderblock attacking another city, he insisted his teammates go fight Cinderblock while he held off Plasmus. After his teammates chose to stay and were consumed by Plasmus, Robin almost fell in a tub of acid before being saved by Cyborg. The two fought alongside each other and defeated Plasmus. Robin welcomed Cyborg back to the team.

With his fellow Teen Titans, self-appointed protectors of Jump City, Robin encountered Slade, the mastermind villain who is Robin's arch rival, responsible for the majority of the villains the Titans clashed with during this time, including the H.I.V.E. and Thunder and Lightning. To infiltrate Slade and learn his plans, Robin became his alter- ego, Red X, and tried to make a deal with Slade. However, Slade outsmarted Robin and discovered his true identity. Later, Slade made Robin his apprentice, threatening to "annihilate" Robin's friends with nanoscopic probes, which have been injected into them unknowingly while they were diverted, if Robin refused. Having no choice, Robin joined Slade and committed many crimes in his favor, until finally he injected himself with the nanites and threatened Slade with the fact that if he didn't deactivate them, he would lose his "apprentice".

Martial Arts: Robin is one of the finest human combatants on Earth, his skills honed to such a level even superhumans and armed adversaries can be overpowered by them. He has mastered several different martial arts styles from across the world, learned from Batman and the True Master. He also has knowledge of Tamaranean fighting techniques.

Genius Intellect: Robin holds expertise in numerous areas, both academic and physical. He is the second most technologically adept Titan (after Cyborg), and helps maintain the security and computer systems of Titan's Tower. He has impressive understanding of various sciences, like physics and chemistry, and is a skilled mechanic and engineer, building all of his own gadgets and equipment. He is a trained detective, with a keen eye and experience in forensics. He is an expert interrogator, and has a very logical mind; he is able to create plans and strategies that effectively take down his opponent. Robin is a master escapologist, marksman, pilot, thief and impersonator, having masqueraded as various identities for infiltration. His charisma and experience make him a nominal leader. 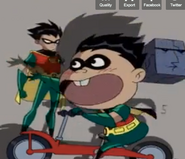 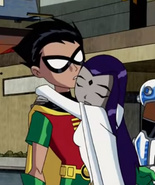 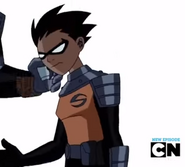