Robin has a huge and obsessive crush on Starfire, but as shown in Sandwich Thief, Starfire does not feel the same way. This is different from how it was in the original Teen Titans, as Starfire had a crush on Robin.

In Hey Pizza!, Robin had the choice between building a senior center (for the unappreciated seniors) or building a community pool (to see Starfire in a bikini and rub sunscreen on her). His crush on her made him constantly go back and forth between wanting to build the senior center and the pool. In the end, he did the right thing and built the senior center, but Starfire decided to model the bikini for him anyways. The bikini ended up being for Silkie, much to Robin's disgust.

In Super Robin, Robin reluctantly did the chicken dance for his friends after Starfire excitedly begged him to. Overall, they seem to be good friends, but their romantic relationship hasn't evolved, at least not yet. At Comic-Con they showed an upcoming video showing that Robin and Starfire kissed but Starfire said that she loved Robin like "the brother", thus disappointing and depressing Robin.

In The Date, she was willing to go on a date with him but had already agreed to go on one with Speedy. Robin decided to sabotage their date and, as a result, Starfire got mad at him and punched him for it, then left with the voice in Robin's head.

In Matched, Robin asked Cyborg to make the Love Matcher 5000 because he wanted to prove he was a match for Starfire, but matching her with Aquaman instead, making him enraged. After finding out that Starfire is matched to Aquaman, he tries to be like Aquaman so he can win Starfire's heart, but instead made Starfire and Cyborg uncomfortable. In the end of the episode, he gives up, but was still mad he wasn't matched with Starfire. But when Cyborg says his Love Matcher 5000 was faulty, he got his hopes up, thinking Aquaman wasn't Starfire's match, but he was. But later the Love Matcher 5000 matched Beast Boy and Starfire with a scratching post, making him so depressed, he cries with Aquaman.

In Colors of Raven, Starfire and Robin are trying to catch Passion Raven, until they find her in a kissing booth. Robin attempts to lure Passion Raven to the prism by a kiss, but is pushed back by Starfire, hinting she likes Robin.

In Starfire the Terrible, when Robin was kissing the moon in a retroback, Starfire is seen behind him, sad, leaving us a second hint that she does indeed have feelings for the Boy Wonder.

In Sidekick, when he sees Starfire in a Batgirl costume, he looks at her in awe for a few seconds before he snaps out of it and tells her to take it off but reverts back by her reply of the suit being too tight.

In Nose Mouth, he has a dream about saving her from several villains as a super strong buff version of himself. He also dreams of saving her in Dreams.

In Breakfast Cheese, he desperately avoids looking at Starfire while she pouts, which hints he likes her but is afraid of revealing that to her and the other Titans.

In Be Mine, he goes to the Valentine's dance with her. However, he seems heartbroken when she reveals that she loves him like a "brother".

In I See You, he takes her out on a fake stakeout in an attempt to get a kiss from her. When she finds out, she becomes angry but is flattered when he admits that she is a great detective.

In Mouth Hole, Starfire gives Robin whistling lessons. While she was whistling, Robin starts to become distracted by her beauty. Robin states that she had beautiful hair and eyes. Starfire then says to press his lips together and puckers up as Robin puckers up as well. Robin then tries to kiss her but Starfire grabs his lips and stretches them out, leaving Robin in pain. At the end of the episode, after Robin rescues the Titans and defeats the H.I.V.E with his new whistling power, Starfire states lovingly that she couldn't know that whistling can be so strong. Robin grabs Starfire by the hand and they begin to dance. Starfire then tells Robin to kiss her. They both pucker up while the other Titans watch in awe.

In Head Fruit, he told Starfire that someone had a crush on her, which was implying himself. As he was about to tell her, Beast Boy shook his head so that everyone would fall out of his treehouse.

In The Return of Slade, Robin said he finally got a kiss from Star after defeating Slade. Although, it was an off screen.

In A Cat's Fancy, Robin is so determined to receive Starfire's attention to where he is willing to become a cat, knowing how much she loves them. Starfire loves cat Robin, to the point where she renames him 'Sassy Pants' and never leaves his side. Because of this, she leaves the Titans to live with Sassy Pants, thus causing her to become a cat lady. After six months, Robin doesn't want her to be a cat lady anymore, so he dresses up as a dog, and Starfire rejoins the Titans, loving the dog Robin, then Robin was presumably hit by a car at the end.

As a young boy, Dick Grayson was orphaned by the tragic murder of his parents during a circus performance. The young orphan was adopted by Bruce Wayne(Batman) (Teen Titans Go!), a millionaire business owner, who lived a double life as the infamous crime fighter Batman. Bruce had also witnessed both of his own parents murder, so the two became very close.

When he grew older, Dick became Batman's sidekick Robin, and spent many years helping him rectify the crime-filled streets of Gotham City. One day, Robin decided to strike out on his own and become a solo hero. Robin decided to become the defender of Jump City. On one occasion, Robin, along with four other teenage superheroes, worked together to save the city. Because they worked so well together, they formed the Teen Titans, and Robin became the leader of the Teen Titans. 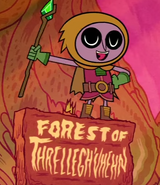