Kraang Invasion of Earth
Donatello or Donnie is the brains of the Teenage Mutant Ninja Turtles. He is in charge of the design and manufacture of all the tools and weapons in their arsenal. He fights with a bō, which converts to a naginata (in which a blade pops out of one end).

Donatello is voiced by Rob Paulsen, also known as Raphael's voice actor in the 1987 animated series.

Donatello may not be the strongest, experienced, or most talented fighter, but his tactical skills and intelligence definitely makes up for it. He has a good line of defense, and is the best at planning strategies. Donatello's intelligence helps him plan out strategies, and be able to build, fix, take apart, and hack into machines. Though Donatello avoids using much hand-to-hand combat, he is strong when it comes to defense and counterattacks and he seems to mainly prefers kicks over punches. In Follow the Leader, it is revealed that Donatello is able to use impressively quick logical thinking and mathematical calculations while in combat. For example, he is able throw shurikens at nearby objects and/or surfaces, in order to make them bounce off objects again and again in the exact directions he calculated previously. Like his brothers, Donatello is stealthy, can hide in the shadows, sneak around without being detected, and use decent hand-to-hand combat skills.

Donatello is extremely intelligent and technical, always working on a strategy, whether it's building machines and gadgets or battling villains; the complete opposite to his free-flowing brother,Michelangelo. Donatello talks a lot in order to describe or explain a situation or theory in full, sometimes even when in the face of danger which can be a problem. He sometimes can be short-tempered, or in other words, high-strung, (but not nearly like Raphael), getting frustrated easily, and shouting when angry, although Donatello is usually kind, caring, and compassionate. He is very protective and complimentary of April (Who is also in teenage years in this adaptation), whom he has a large crush on. Donatello has a more prominent role in this series compared to the original 1987 series, being more active and purpose-driven, but at times, does not understand and/or has quite a hard time understanding the lectures of Master Splinter. He is the second-youngest turtle, despite being the tallest.

Donatello: I do not think that. No, I'm just freakin because Casey and April went off on their own. Alone.

Michelangelo: Why? Because they forgot to bring a compass?
Donatello: No genius. What happens when two teenagers who like each other go out into the woods alone?
Michelangelo: AHHH! They get eaten by squirrels.

Donatello: You know what? Forget I said anything." 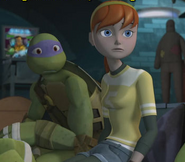