Like the Mirage comics, Donatello has a complex personality in the 2003 animated series. Donatello is voiced by Sam Riegel in the original English version and Yuji Ueda in the Japanese version. Several episodes concentrate on him, as well as his emotional and intellectual struggles. As in his other incarnations, he is intelligent, good with his hands, and very introspective, frequently becoming pensive over things he doesn't understand. He typically has a very close, however platonic, relationship with April. He also displays closeness with Michelangelo akin to that seen in the original movie. Even more pacifistic than his other incarnations, Donatello shows a greater interest in technology than his ninjutsu training. Even so, Donatello will defend his brothers at any cost, and he frequently assists the team in many ways through the technology he develops, mostly vehicles and communication devices. In this animation, Donatello is generally well liked by all of his brothers, never engaging in major confrontations with them. In fact, Donatello was the one to reunite his brothers against the Shredder in the episode "Same As It Never Was", having been sent to an alternate future where the team fell apart after he vanished. His skin color is a light, brownish green color; this particular color is only used for him in the 2003 animation. In the fourth season, he was infected by a monster, and in the episode "Adventures in Turtlesitting", he mutates into a monster himself, which happened to Raphael in the comics. In the seventh season, also called "Back to the Sewer", Donatello blamed himself for Master Splinter's decompiling and vowed to restore his bits from cyberspace. This obsession caused him to disregard anything else, such as the war between the Purple Dragons and the Foot clan, as unimportant. It wasn't until seeing his brothers in danger from the Cyber Shredder did he realize he was ignoring his responsibilities to help them and promised not to let his obsession with saving Master Splinter take control again.

By the time of Turtles Forever, the 2003 Donatello is in total disbelief over the scientific aptitude of his 1987 counterpart, in which the alternate Donatello replied, "Science isn't all just facts and figures", although the two still manage to work together to track their enemies.

A while back, I made a promise to some friends... and, believe it or not, that thing struggling in the net right now is one of those friends. You see, it's kind of a long story. Our friends were mutated into monsters by The Shredder's scientists; now, they're forced to live underground, prisoners of an ancient city powered by a giant crystal moon. And I believe it's these very same special crystals that are the key to saving our friends, and hopefully curing them for good. Trouble is, right now, my friends don't particularly want to be cured. - Return to the Underground

They say the sea is the last unexplored frontier on Earth, and I would have to agree. Because what we're looking at is one of the strangest things I've ever seen. And that's saying a lot coming from five foot tall talking turtle. What started out as a test run of the new shell-sub quickly turned into a discovery of bizarre proportions. Of course, all exploratory missions should be undertaken with great caution; If you venture into new territory unprepared, it can really come back to bite you in the shell. - "Junklantis"

Warning: the stunts you are about to witness are done by professional maniacs. Do not attempt this yourself. Do not stand up in an open vehicle traveling at speeds upwards of 90 miles per hour. If an eighteen-wheeler driven by a crazed wacko is trying to run you off the road, do not continue to agitate said crazed wacko! And, most importantly, do not attempt to disarm a thermo-nuclear device in the back of aforementioned eighteen-wheeler. . . that is, unless you want to kiss your shell goodbye! - "H.A.T.E." 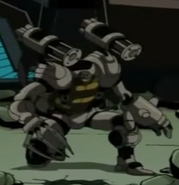 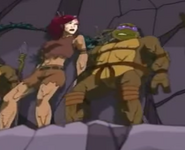