Donna Tubbs Brown who is voiced by Sanaa Lathan is the second wife of Cleveland Brown and works as the principal's secretaryat Stoolbend High School. She has two biological children from her previous relationship with Robert (last name unknown, which is a joke later in the series), Roberta and Rallo, and she has kept her maiden name (seen in "Pilot", Cleveland says, "Back in high school, I would have given anything to spend the night at Donna Tubbs' house."). As a result of her marriage to Cleveland, she has adopted a third child, his son Cleveland Brown, Jr.

Donna and Cleveland were initially best friends in high school, although Cleveland clearly had romantic feelings towards her. Donna unfortunately was for the most part oblivious to his feelings, and instead dated Cleveland's unofficial rival Robert. Despite Cleveland's attempts to get Donna to see Robert for what he truly was (a self-centered, irresponsible jerk), Donna ended up marrying Robert shortly after graduation. Seeing no reason to remain, Cleveland left Stoolbend and Donna behind.

Despite many attempts at making their marriage work, Donna and Robert ended up separating due to Robert's heavy drinking and drug abuse, leaving Donna to raise their children alone. Robert would visit occasionally, but more out of selfish desire than any familial reasons. After years apart, Donna was of course overjoyed to see her best friend, Cleveland again. Cleveland and his son, who were passing through Stoolbend while driving to California, had stopped by the high school to retrace Cleveland's old haunting grounds. Donna invites the Browns to stay at her house, which results in a rekindling of their friendship that soon blossoms into a full-blown romance. The two soon marry, and honeymoon in New York City a few months later.

Having been friends for years prior to getting married, Cleveland and Donna have a close relationship both sexually and platonically. Donna comes off much more patient and understanding than Cleveland's first wife, Loretta, and is more attentive to him as well. Her relationship with her children meanwhile is somewhat more shaky, as both her children are the result of a broken home and neglectful father. Donna does her best to keep her children under control, but is aware that they need a father figure at times. Yet despite any issues that she and her kids have, it is clear that they care for one another. Donna's relationship with Cleveland, Jr. meanwhile is underdeveloped yet, save for the fact that Cleveland, Jr. is quick to do what he can to follow Donna's wishes for fear of another divorce occurring. It is also implied that he sees Donna as the mother figure that Loretta should've been. However, she has shown to be willing to protect him from danger, such as when she saved him from an ax-wielding Donny in "A Nightmare on Grace Street" by throwing a wine glass at his head.

She takes care of odd jobs, assisting Principal Wally when he is indisposed and serving as a secretary of sorts (she can type 85 words per minute).

She is shown with an extremely large posterior, that is joked about often in the series.

She tends to drink a lot of wine to the point she might be an alcoholic.

She is a talented and proud Recorder player and wears a wig that hides her gray hair.

In "Mama Drama," it is revealed that her mother is Dee Dee Tubbs who was part of a musical group until she left Donna with Uncle Kevin. The two of them reunited by the end of the episode. 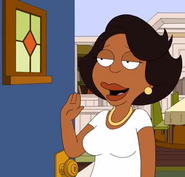 Add a photo to this gallery
Retrieved from "https://xianb.fandom.com/wiki/Donna_Tubbs-Brown?oldid=378677"
Community content is available under CC-BY-SA unless otherwise noted.