Start a Wiki
Dot Warner (aka Princess Angelina Contessa Louisa Francesca Banana Fanna Bo Besca the Third), is the only girl of the Warner siblings. She wears a flower between her ears (that adapts to fit various costumes), occasionally wears earrings, a short pink skirt and frilly pink or white panties (or bloomers). She is (in her opinion) the cutest character on the show. Her age is said to be biologically ten in an interview with producer Tom Ruegger.

The youngest of the Warner Siblings. She's cute, pretty and goes to great lengths to maintain that image. In Wakko's Wish, Dot needed an operation. While the audience is led to believe that the operation is to treat a life-threatening illness, it is later revealed that the surgical procedure in question is plastic surgery to implant a beauty mark on her cheek (which she calls a "cutie mark"). Cuteness is apparently her greatest strength, her weapon & joy if you will, as revealed in numerous episodes.

Cuteness and beauty are not her only weapons, however. Dot has been known to be as zany as her brothers. Her harassment of the alien in Space-Probed proves she can hold her own with the boys.

Dot finds her brothers' amorous advances towards various female characters on the show, such as Hello Nurse, completely detestable. Hypocritically, she says "Hello, Nurse!" when she is attracted to any man in her view who she considers handsome. Her main crush is Mel Gibson, but other crushes have included Ricardo Montalban and Batman, to name a few.

She hates it when someone calls her Dottie. So much that she threatens to kill anyone who would dare call her Dottie. This is proved when she says "Call me Dottie, and you die." in many episodes, and even throws a bomb at anyone who calls her Dottie (Episode 35). Very few times has anyone actually called her Dottie without retropution. One such time was when Yakko called her Dottie and she went on with the show like it was nothing. Really. She then hugged some squeezy cheese, the number one not quite cheese food in Nevada. She shares this trait with Babs Bunny from Tiny Toon Adventures, as well as the same voice actress. Her voice is slightly higher, younger, and cuter than Babs Bunny's.

Her brothers showed great concern for her. Even when Yakko and Wakko make fun of Dot's I'm Cute song and she yells at them about how they ruined her song, Yakko insists that she's "awfully cute" when she's mad. They also stick up for her and even get revenge for her. As seen in Cutie and the Beast, when he threw out their little sister they were provoked, so they decided to become little pests to teach him (Taz) a lesson about breaking their sister's heart. In the movie Wakko's Wish, she is told the story about her birth by her brother Yakko for a bedtime story (however it is told like a fairytale and may or may not be true). In this story it has been said that Dot was born on the first day of spring. Her brothers felt as guardians to their younger sister because with Dot having no parents, they needed to protect her from danger and keep an eye on her. They have the same feeling when she is attracted to handsome men as she is to them around beautiful women which is a running gag in the series. Yakko, in Dot's life, is a parent type older brother while Wakko is the more worried brother and cares for her safety. Also, in the series she is a princess while her brothers are princes. Dot usually likes Wakko, but sometimes gets angry at him.

Deep down inside, Dot loves her brothers dearly. 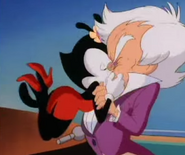 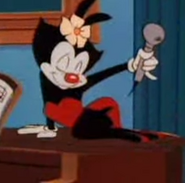 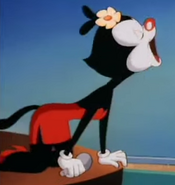 Add a photo to this gallery
Retrieved from "https://xianb.fandom.com/wiki/Dot_Warner?oldid=317289"
Community content is available under CC-BY-SA unless otherwise noted.