Elesa made her debut appearance in Enter Elesa, Electrifying Gym Leader!, when Ash and Bianca went to one of her modelling shows in order to request a Gym Battle. Elesa was excited to see Ash's Pikachu and even left the runway just so she could get a closer look. Later, Elesa battled Bianca in a three-on-three match and easily defeated all of Bianca's Pokémon with her powerful Zebstrika.

Elesa battled Ash in Dazzling the Nimbasa Gym!. Although Ash proved to be a far tougher opponent than Bianca had, she still gave the young Trainer a tough time in her Gym. However Ash was able to pull through and earn himself a Bolt Badge.

She reappeared in a fantasy in Climbing the Tower of Success!.

She also reappeared in flashbacks in Piplup, Pansage, and a Meeting of the Times! and Curtain Up, Unova League!. She also makes a cameo appearance in the credits of Genesect and the Legend Awakened. 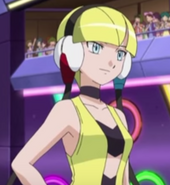 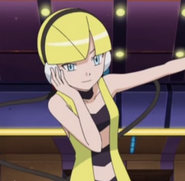