She is the 54th Arrancar in Sosuke Aizen's army and one of Tier Harribel's three Fracción.

Cero: Apacci can fire a red Cero, which she blasts from the tip of her horn.

Bala: Apacci can fire red Bala blasts from her fists. They are powerful enough to disperse Rangiku Matsumoto's released Zanpakutō.

Sonído: Apacci can use Sonído to maneuver effectively in battle, allowing her to take her opponents by surprise. She is fast enough to catch Rangiku, a Shunpo expert.

High Spiritual Power: Being an Arrancar and a Fracción, Apacci has a high amount of spiritual power, allowing her to fight against a Gotei 13 lieutenant. Her Reiatsu is red.

Enhanced Strength: Apacci possesses an abnormal amount of physical strength, allowing her to throw Rangiku a significant distance away with a single arm, and easily break apart a stone pillar by simply hitting the side of her fist against it.

Hierro: Like all Arrancar, Apacci possesses the natural ability known as Hierro. When she was tripped by Cyan Sung-Sun, her head hit a metal railing, which was bent from the impact, while she remained unharmed.[4] It also allowed her to withstand a fireball from Momo Hinamori's Tobiume with only minor injuries.

Quimera Parca , kimera paruka; Spanish for "Reaper Chimera", Japanese for "Mixed-Beast God"): With the aid of Franceska Mila Rose and Sung-Sun, Apacci can use a technique called Quimera Parca. To activate it, each of them tears off their left arm and combines it with the others to form a new creature. This massive creature has a deer skull for a head, a muscular torso, a long black mane, deer legs, and a serpent for a tail. Apacci claims its name is Ayon and it is their pet,  but this creature is unable to hear the instructions of any of the three Fracción

Cierva (碧鹿闘女 (シエルバ), Shieruba; Spanish for "Doe," Japanese for "Blue Deer Battle Girl"): Apacci's Zanpakutō consists of the collars she wears over her wrists. When drawn, they take the shape of chakrams, with three blades protruding from each one.

Pulsera Cuerno (角輪 (プルセラ・クエルノ), Purusera Kueruno; Spanish for "Bracelet Horn/Antler", Japanese for "Horn/Antler Ring"): Apacci can throw Cierva as though they were boomerangs.[43] When thrown, they can easily tear through human flesh.

Resurrección: Its release command is Thrust (突き上げろ, tsukiagero). In her Resurrección form, Apacci's body is covered in brown fur, she sports deer-like antlers above her brow, her feet are replaced with deer-like hooves, and a small tail emerges from where her tailbone would be located. Both her eyes change to amber, and both eyes gain a red outline around them, with small lightning bolt-shaped markings on both sides of her face. 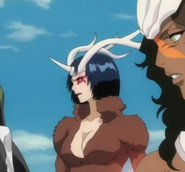 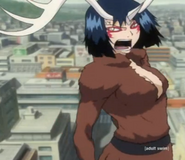 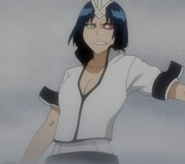 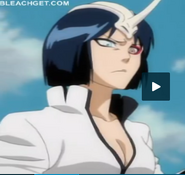 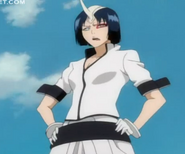