Emma Frost is the beautiful and mysterious telepath who showed up on the X-Men 's doorstep just when they needed her most. She once tried to start her own school for gifted mutants, the Massachusetts Academy. The ambitious Emma is the X-Men's only hope of finding their missing colleagues. She can read minds and project thoughts into other's minds, controlling their actions. She can project mental blasts to knock out her victims by touching their brow and is able to change her skin into diamond form. Source: Nicktoons

Emma is a cold and calculating woman. At first, she is quite dry-witted and very sarcastic, and can seem cold-hearted, but most times she did good things, like sacrifice her self to free all people from the Phoenix Force.

Emma is a tall, beautiful, woman with fair skin, pale blonde hair and blue eyes. Her civilian clothes consist of a white top and jacket, white jeans and a belt. Her uniform is an X verse tank top, with long gloves that cover her entire arms. She also wears a cape and white jeans held by a belt and wears white heels. For accessories, she wears a white collar around her neck as well as blue lipstick.

Headmistress of the Massachusetts Academy

Emma was the headmistress of the Academy, and according to Wolverine, was teaching her students to be bullies. She closed it down since her students began to be taken.

At some point, Emma joined the Inner circle. Her mission was to capture Jean Grey and take the Phoenix Force from her but she first had to take out Charles Xavier. Her plan backfired when Jean sensed the attack and tried stopping it by releasing the Phoenix force, destroying the school and the causing the disappearance of her and Charles in the process. Emma decided to hide Xavier's body in Genosha.

Emma approached the X-Men saying that she could find Xavier for them in exchange for being part of the X-men. She tells Logan that she misses being part of a team and since Cerebro cannot be operated without a telepath, they need her. At first Logan's answer was 'no' but Emma proved herself by 'finding' Charles on Genosha.

Emma was caught eavesdropping on Wolverine and Xavier's conversation causing her relationship with Logan to be more strained. The X-men's next mission was to stop Storm from floating Africa. Emma used her powers to free Ororo from Shadow King's control, thus earning Logan's trust.

After being a part of the X-Men for a while, Emma develops feelings for Scott. When he is distracted by a vision of Jean during a mission and threatens to quit, Emma offers to erase his memories of Jean. It is through their journey of his mind that they discover the true cause of the explosion at the mansion.

Eventually, Emma finds Jean in the hospital. When her and Scott go to get her, they are met by Archangel, who was sent on the same mission by Sinister. After Scott and Jean are taken by Archangel, Emma returns to the mansion to use Cerebro to find Scott. She locates them and Jean is brought back to the mansion. Once home, Emma, with help from the Cuckoos, sends out a mental blast that knocks out everyone, including Jean, whom Emma takes to the Inner Circle.

Once at the Inner Circle, Emma explains to Jean about the Phoenix and how the Inner Circle's purpose is to release it before it causes any destruction. Emma and the cuckoos nearly succeed until Jean senses Scott is injured via their psychic connection. Emma convinces the rest of the Circle that bringing Scott there will help, so she leaves to help him. Eventually, she discovers that the Inner Circle plan to release the Phoenix so they can control it and not destroy it. Emma knows that the Cuckoos are not powerful enough to contain the power of the Phoenix, but the other members don't listen to her. After the Phoenix leaves Jean and takes over the Cuckoos, Jean telekinetically binds her to the wall. When Logan shows up, he almost leaves her there, then remembers the last message Xavier left him - to trust Emma. The two chase after Jean and Scott who have gone after the Phoenix. When Scott tries to stop the Phoenix from re-entering Jean and Jean is unable to protect him, Emma does. She allows the Phoenix to enter her before changing into her diamond form. The power of the Phoenix was too much to bear, and Emma sacrificed herself by allowing to be shattered by the tremendous power.

Omega-Level Telepathy: The ability to read minds of others and project her own thoughts in those minds, works within a longer radius. With enough effort it can significantly increase the radius.

Organic Diamond Skin : Emma can transmute her body into a flexible diamond-like state, giving her near invulnerability. But in this form, she can not use her telepathic powers. She demonstrated that power for the first time in Overflow. As part of her second mutation.

When she first came, Logan was not hospitable towards her and had no trust in her but allowed her to join and find Xavier. When he caught her eavesdropping on his and Charles' conversation, he kicked her out but Beast convinced him to let her back in order to find Storm, Emma found and convinced storm that Africa was not on fire and fought the Shadow king by herself. These actions gave her trust from Wolverine. When it was revealed that Emma was behind everything, Wolverine lost his trust in her but allowed her to help stop the Phoenix Force. It is unknown how Logan felt after Emma's death, but he was no longer mad at her.

Emma has shown a romantic interest in Scott but nothing came out of it since Scott didn't return those feelings even after Emma tried to erase his memorises of Jean. After Emma's secret was revealed, Scott lost his trust in her but didn't allow Jean to attack her. After Emma sacrificed her life to save everyone, Scott seemingly forgave her.

At first, Jean saw Emma as a friend having remembered that she saved her from Archangel, but when Emma's true intentions were revealed, Jean tried to attack her but was stopped by Scott.

Bobby had a crush on Emma when she first came (much to Kitty's displeasure) but Emma was not interested and did not return these feelings from him.

Emma is first introduced as an enemy of the X-men but later joins them. She and Scott became lovers after the final death of Jean Grey (although, as the Phoenix, Jean Grey can never die, and is not dead, but rather is currently in the White Hot Room doing Phoenix work). 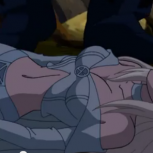 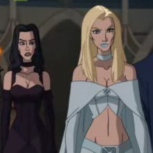 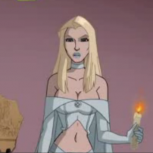 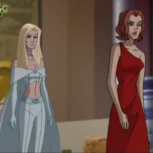