D'Ken is a Shi'ar and the brother to Lilandra and Deathbird. He was briefly the emperor of the Shi'ar Empire. D'Ken captured an aircraft on Earth containing a man and woman. The woman was killed but he man changed his name to Corsair and led the Starjammers.

D'Ken tried to get the M'Kraan Crystal to reshape the universe to his own image, but was stopped by the Phoenix-possessed Jean Grey. His sister Lilandra then ascended to the throne. 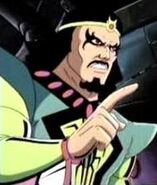