Lothal Insurgency
Ezra Bridger was a human male rebel from the planet Lothal and the Padawan of Kanan Jarrus. Bridger, who for years was unknowingly Force-sensitive, grew up as an orphan and con artist on Lothal during the reign of the Galactic Empire before meeting Jarrus and his rebel crew, who operated aboard the Ghost.

After getting caught up with the rebels during a weapons heist in Capital City and freeing Wookiee slaves, Bridger joined the rebel crew and began training as a Jedi under Jarrus' direction. Bridger and the crew undertook many missions together in an effort to defeat the Empire.

Ezra Bridger was first revealed as a character from the forthcoming animated series Star Wars Rebels at the January 2014 Nuremberg International Toy Fair, where Bridger appeared on the packaging for the LEGO Star Wars Rebels Phantom model. On February 14, 2014, as part of a Lucasfilm promotional campaign to introduce the series' characters, TV Guide ran an online story featuring an exclusive first look at Bridger's character and announcing that he would be voiced by actor Taylor Gray. The story included a Lucasfilm production video revealing that Bridger was the first character created for Star Wars Rebels.

In the episode of the animated television series Star Wars Rebels Empire Day, it was confirmed that Ezra was born during the first Empire Day. According to the Star Wars.com blogger James Burns, Ezra Bridger was named after the Old Testament character Ezra. Simon Kinberg and Dave Filoni also confirmed that Ezra and several characters in the television series were named after historical and Biblical characters in order to imbued their names with a sense of meaning and purpose that would fit their characters.

Ezra Bridger appears in Angry Birds Star Wars II. At one point, Ezra Bridger sneaked into an Imperial base to steal a stormtrooper helmet. He was chased by Imperial troops, but was rescued by the mysterious warriors Sabine Wren and Hera Syndulla. They escaped from Agent Kallus, and Syndulla let him join her crew aboard the Ghost.

In the LEGO Star Wars Rebels Movie Shorts, Ezra was on a mission with Chopper in the Phantom when they came under attack from a Star Destroyer. Jarrus, Syndulla, and Orrelios rescued them aboard the Ghost. Bridger suggested they charge the Star Destroyer's bridge and hide behind it, and eventually the warship jumped to hyperspace. At another time, the Ghost was damaged by a Star Destroyer, forcing it to go to a space station for repairs. Bridger was aboard the Phantom and rescued Orrelios and Jarrus from the planet in time to finish repairs to their starship.

Ezra Bridger was born in 3258 LY, on the day of the inception of the Galactic Empire,and grew up on the planet Lothal in the Outer Rim Territories. Hoping to make the galaxy a better place for him, his parents Mira and Ephraim Bridger set up public broadcasting transmissions to speak out against the Empire's harsh rule but this would cost them their own lives. So, by the time Ezra was 7, his parents were found and taken away by the Empire, leaving him to live largely on his own for the next eight years and find work as a con artist and thief, stealing technology and reselling it on the black market, while unknowingly using the Force to occasionally get himself out of tough situations. Eventually, he would come to live in the abandoned LothalNet comm tower E-272, where he would keep a collection of stormtrooper helmets.

Bridger would later be apprenticed to a Xexto, Ferpil Wallaway, owner of apawn shop in Lothal, and skilled pickpocket who had various underworld connections. The Xexto taught the boy everything he knew, and they would try to pick each other clean for fun. The boy worked for him, doing jobs like scanning wealthy-looking tourists and trick them and selling them stuff. Bridger would also befriend Moreena Krai, a girl of the same age as him, who knew of his under-handed skills. 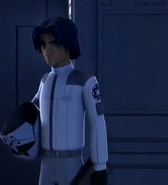 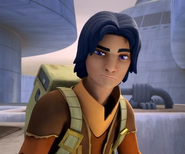