Beatriz DaCosta, born and raised in Brazil, joined the Brazilian secret service, Espiaos Nacionales. Her first and only mission was to capture some experimental equipment that produced an incendiary material called Pyroplasm. DaCosta was caught in an explosion of this material, triggering a previously inactive metagene. Now, Fire, DaCosta can transform into a being of living green fire with the power of flight and the ability to generate flame blasts. Fire shares a close friendship with Ice, illustrating not only the large difference in their powers but personalities. Fire being aggressive and loud and Ice, shy and soft spoken.

Fire was chosen to accompany founding members, Shayera Hol and the Flash to check on a security breach on Blackhawk Island. Unknown to her, Flash harbored a small crush on her. But, like most of the other members of the League, Fire gives the benefit of the doubt to the original seven members. She inadvertently dropped Flash at his request to save Shayera Hol from a robot Condor. Months later, she was one of the five Leaguers to be taken control of by Roulette. Fire was seriously injured in her match against Black Canary, after she was knocked out by Canary's sonic scream at close range. 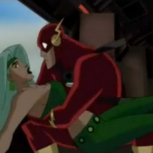