He is the Fourth Raikage of the Village Hidden in the Clouds. His father is the Third Raikage.

A is the son of the Third Raikage. He was groomed for the position of the Fourth Raikage.[3] At some point in the past, due to A not having a blood sibling who could be his tag-partner, try-outs consisting of young children were gathered in order to determine one, in keeping with a long-standing Kumogakure tradition of the Raikage having a tag-team partner. After many attempts, they found only one child who was able to successfully match A's power and use the Lightning Release: Double Lariat on a training dummy.[4]

As a result, that child was given the name "B", and A stated that they would be brothers from that day on.[5] He and B would eventually be teamed together on a mission with A's cousin, the jinchūrikiof the Eight-Tails. While on the mission, he told A that Killer B would need something to fill the void that would be created if he was chosen as the beast's next jinchūriki.

Some time later A's cousin Blue B lost control of the beast and it went on a rampage. A was made part of a special team tasked with subduing the rampaging Eight-Tails. After A and the Third Raikage arrived to deal with the matter, A was instructed to restrain the beast as his father prepared to use the Kohaku no Jōhei. As the team attempted to bind the Eight-Tails, the beast impaled Furui with its horn, leading to A to cut it off. With enough preparation, the Third sealed the beast away temporarily. After B became the beast's jinchūriki, A, remembering what his cousin had said to him, tried his best to fill that apparent void.

At some point during the Third Shinobi World War, A would clash withMinato Namikaze for the first time.[6] Before Minato retreated he recognised Killer B as the jinchūriki of the Eight-Tails and told A that next time they met it would be to put the title of "Kage" on the line and also offered A the advice of making sure his brother knew who he was before becoming neither human nor jinchūriki.[7] They would clash many more times after that. A was once even told by Jiraiya that he believed Minato was the "Child of Prophecy".[8] When A's father died during the the third war, he inherited the title of Raikage.[9] Afterwards, out of fear of losing him, he forbade B's continued training in the Lightning Release: Lariat and ordered him to complete his training in the Tailed Beast Ball at the Valley of Clouds and Lightning and restricted him to the confines of the village.[10] At some point, he forbade B from fully transforming into his tailed beast due to its extreme power.

In the anime, after an encounter with the Nokizaru Group, A crossed paths with Tsunade and requested her aid in removing the Exploding Insect implanted in his subordinate. After accepting her arm wrestling challenge, realising that he could not beat Tsunade in terms of strength, but at the same time, he needed to help his subordinate, A used speed to defeat her. After Tsunade diagnoses the situation and realises that one of the insects was also inside A, she decided to conduct the surgery. However, when she had Shizune conduct the surgery and later left after blood splattered on her. Shizune explained Tsunade's haemophobia caused by the loss of her two great loves, A dismissed her state of mind as a weakness and would not trust his mens' lives to her with Shizune, who had successfully completed the surgery, defending her mistress.[11]

Two years after Tsunade returned to her village to become the Fifth Hokage, she sent A an invitation to join an impromptu Chūnin Exams hosted by Konohagakure and Sunagakure. He immediately rejected the offer, believing it to be a joint effort by the two villages to attack Kumogakure. A instead sent a respond saying the village was too busy to prepare and had C and Darui make sure B wouldn't sneak off to this event.

He was first seen when he received news of Killer B's capture by Akatsuki. Enraged that his own brother had been lost so soon after Yugito Nii, A called for a meeting of the five Kage to discuss Akatsuki. Because B's captor was Sasuke Uchiha, a former Konoha ninja, A had Team Samui take a letter to the Hokage to inform Konoha that he would personally deal with Sasuke.

A departed for the Kage summit with two bodyguards: Darui and C. On their way to the Land of Iron they reunited with Team Samui, who provided them with information on Sasuke acquired in Konoha. C quickly discovered that Team Samui had been followed by Naruto Uzumaki. A kept his men from attacking Naruto and agreed to listen to what he had to say. Naruto pleaded with the Raikage to spare Sasuke, but his request was flatly refused and the Raikage berated him for sticking up for a criminal and advises him to think about what he should really be doing.

We will test your Compatibility with A one by one. Try to Chop off a Dummies head by teaming up with A and using the Double Lariat on it. Remember the Double Lariat will only work correctly if equal strength is applied from both sides. If one side is too strong or too weak the head will only bend. First bump fists with A to determine how much power you should use. Then you will test out your Double Lariat on the Dummy.

You can't keep up with me unless you get bigger and stronger. Are next mission is a Scroll Recovery.

We still have a long way to go before the Double Lariat needs to be. I am still toning down my strength to match yours. The trick to this technique is keeping both are strengths equal. 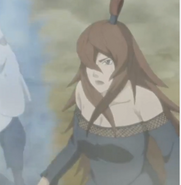