Fūka (フウカ, Fūka) was a kunoichi from the group of grave robbers who had dug up four of the dead Twelve Guardian Ninja.

Fūka was portrayed as a seductive vixen as a way to lure her prey in and kill them with an Execution by Kiss. She would further speed up the process by giving her targets a choice between a French or soft kiss. Her most preferable victims were those with a natural affinity for wind chakra. She took great pride in her appearance and would become infuriated when any harm came to her physical being, especially her hair, the very casing of her soul. During her second fight against Naruto Uzumaki, she showcased a sadistic side when she delighted in Naruto's anguish.

Fūka's wardrobe was rather scantily-clad, and fit tightly on her tall and slender form. This seductive attire consisted of a dark-pink gi and disconnected arm warmers that reached down to her light-purple spandex shorts. She wore a pair of black low-heeled boots. One of Fuka's most apparent features was her long flowing maroon coloured hair, which fell down to her waist. She had blue eyes and fair skin. A notable feature was the beauty-mark under the left side of her lip. Her young and attractive form was nothing but a façade; her unusual powers and altered appearances at certain points suggested that she was much older than she portrayed herself to be. Upon sustaining injury, the sudden loss of body-control would result in a fragile, dull and considerably aged visage.

Like Orochimaru, Fūka had the ability to paralyze her targets through simple eye contact. She also showcased enough physical power to knock Naruto off his feet and face him as the offensive in a kunai-to-kunai clash.

Amongst Fūka's strange artillery of ninjutsu was the Hair Binding Technique. On the brink of death, she was able to constrict her hair around Naruto's body in her efforts to bind him. Because her soul was attached to her hair, this technique was still active when Naruto severed a plethora of follicle tips from her roots.

Fūka's most unique skill was her ability to suck the chakra and souls of her opponents through a kiss. The syphoned proponents then compensated for a body and an array of elemental ninjutsu. It is because of this power that she possesses a diverse array of ninjutsu and all five natural chakras.

Much to her disadvantage, Fūka had to use several bodies to store all this excess energy. All bodies were sealed within a scroll, and required the Colour Course Change technique to be utilised. This technique instantly transferred her consciousness from body to body, which in turn fooled her opponents into believing that she could regenerate her wounds and use all five chakra natures at once. This technique was still very much accessible to her while incapacitated. Because each body housed a different type of chakra, if one were to be destroyed, its respective element would fall with it.

As part of Furido's plan to destroy Konoha, Fūka, along with her team-mates Fuen and Fudō, proceeded in stealing the corpses of Seito,Nauma, Kitane and Tōu. The four were part of the Twelve Guardian Ninja and were masters of the Limelight technique. Their revival was crucial in Furido's plan to destroy Konoha, for their technique had enough potential to decimate ninja villages within seconds. Team 7, however, on their mission to the Fire Temple, were quickly informed by Chiriku that his graves had been robbed. In turn, they ventured out into the landscape and began to chase down the robbers.

The grave robbers quickly caught onto their persecutors, which prompted them to imprison and separate them to later dive in and head for the kill. With haste, the four scattered out into the labyrinth of pillars and found themselves against a set opponent. In due time, Fūka faced Naruto, and displayed her prominent use of all nature elements. Much to his surprise, Fūka offered him a kiss, and allowed him to choose between french and soft. Little did he know that this was a to lure into hertrap. Eventually, after successfully incapacitating him, she managed to employ the technique on the lad, however, she was quickly pushed away by the evil chakra of the Nine-Tails. From there, she, along with the rest of her team, retreated.

Days later, her team, along with the bodies of the four ninja guardians, made their way into the village. Once again, she is placed against Naruto. As they battled, Naruto noticed that Fūka was constantly switching bodies to perform different elemental jutsu, and that her hair was of more importance to her than her body. In turn, he continuously attacked her hair (which destroyed her bodies) and left her in her purest state - a soul. As the battle came to a close, Naruto charged at her with a Rasengan in hand, and she at him with her hair. The latter managed to reach her before her attack landed, resulting in a quick demise from a blow to the head. 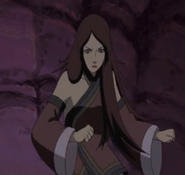 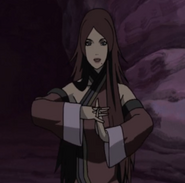 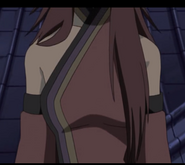 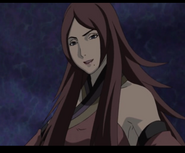 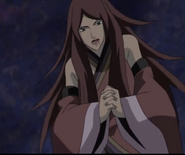 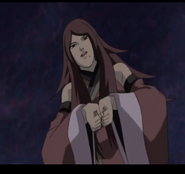 Add a photo to this gallery
Retrieved from "https://xianb.fandom.com/wiki/Fuka?oldid=316541"
Community content is available under CC-BY-SA unless otherwise noted.