Soon after, coming to the defense of the inhabitants, the Z Fighters challenge the ruthless killing machines. Future Android 18 kills Future Piccolo with a powerful kick to the abdomen, Future Tien Shinhan with a punch to his gut followed by a High-Pressure Energy Wave, and Future Yajirobe by breaking his katana before killing him with a High-Pressure Energy Wave too (this is a coincidence given the fact that Android 18 breaks Future Trunks' sword as well). The androids kill Future Vegeta, Future Yamcha, Future Krillin, andFuture Chiaotzu as well.

Thirteen years later, in Age 780, the androids still continue to cause havoc across the Earth, killing off more than half of the planet's population. Gohan(the only surviving Z Fighter from thirteen years ago and now a Super Saiyan) and Trunks fly over Super World, an amusement park being attacked by the androids. Gohan instructs Trunks to stay out of the fight, and proceeds to battle Android 17. Gohan (as a Super Saiyan) seemingly gains the upper hand, and Android 18 is forced to step in and help her brother in battle. Trunks rushes in only to be quickly defeated by Android 18. However, before she can deliver the finishing attack to Trunks, Android 18 is attacked by Gohan, who saves Trunks and attempts to hide in the ruins of the park. In an attempt to draw them out of hiding, the androids bomb the entire area. Gohan and Trunks remain hidden, but at the cost of Gohan's left arm, which is blown off in the bombing.

One day, the androids attack Pepper Town, a city close to where Gohan and Trunks are resting. Gohan ambushes the androids and the battle begins. Despite his handicap, Gohan is able to fight off both of the androids for a short time. However, he is soon quickly overwhelmed, and is knocked down into the street. The androids then proceed to launch a barrage of energy blasts like machine guns from the sky, which kills Gohan. The two fly off, and Trunks awakes when his mentor's life force disappears. Trunks finds Gohan's corpse in a pool of bloody water. The loss of his best friend causes his anger to explode, and he transforms into a Super Saiyan.

Three more years pass, now in Age 783, Future Trunks finds himself the only warrior left capable of defeating the androids. One day, in a fit of rage, Trunks decides to head off and attempts to defeat the androids who are attackingBridgetown. However, upon his arrival, the androids quickly dominate him. They then begin to toy with the young warrior, swatting and kicking him around effortlessly. To finish him off, Android 18 prepares a large energy blast which she launches at Trunks. However, he survives, and later uses a Time Machineto head off 20 years into the past to warn Goku and the others of the impending android threat.

Trunks finally returns to his own time after the defeat of Super Perfect Cell in the main timeline, and with his training in the Hyperbolic Time Chamber, knows he has more than enough power to finally kill the androids. While the androids are attacking Parsley City, Android 18 is venting a lot of anger by destroying some terrain, as she is furious with Android 17 for killing a boy she thought was cute (she is angry about losing a video game in the Japanese and Kai dubs). Shortly afterwards, Trunks arrives declaring that he is going to cause their end. Android 17 insists on just playing with Trunks instead of killing him, but Android 18 furiously attacks him, only to prove no match for his new found power. Android 17 soon joins the fight, and the two attempt to attack the mighty Super Saiyan. Trunks effortlessly dodges and blocks both of their hits, and eventually singles out Android 18, who he obliterates with a powerful attack. Her brother is blown up and destroyed by Trunks right after her.

Trunks states to the Z Fighters that the androids he knows in his time, while much stronger than him, are not nearly as strong as the ones released in the main timeline. It is safe to assume that power-wise the future androids are not too much weaker, as they are still strong enough to kill a Super Saiyan. However, Gohan is seemingly able to overtake each of them separately, but when they team up, he becomes quickly overwhelmed (in the original manga and Dragon Ball Z: Budokai Tenkaichi 2, Android 17 states that he did not even use half of his power to fight Gohan). The androids of the main timeline are seen being able to easily overtake a single Super Saiyan separately, as seen when Android 18 defeats Vegeta and knocks out Trunks with one hit, something the androids of the future could not do to Trunks. In "Ghosts from Tomorrow", Future Android 18 gets in several hits on Super SaiyanFuture Gohan, when he was not looking. 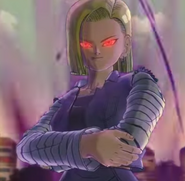