Template:Infobox characterThe wife of Ben 10,000 (Ben 10). She is the mother of Chrono Spanner.

In Fight at the Museum, Kai found the Orb of Pooma Poonkoo in Ben 10,000's tower that she thought was lost forever.

In The End of an Era, Kai helped Humungoopsaur fight Dr. Animo and later on, Maltruant. It is shown that she has Excalibur in her possession and she uses it as her primary weapon. 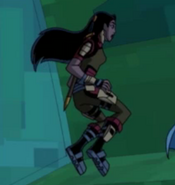