The Village Hidden in the Sand

Gaara of the Sand

Gaara (我愛羅) is a shinobi of Sunagakure. He was made the jinchūriki of the One-Tailed Shukaku before he was born, causing the villagers of Suna to fear him as a monster. With nobody to connect to, Gaara grew up hating the world and looking out only for himself, justifying his own existence by killing anyone he came across. After being defeated in battle by Naruto Uzumaki, a jinchūriki like himself who found strength in his friendships, Gaara starts emulating Naruto. He becomes Suna's Fifth Kazekage (五代目風影, Godaime Kazekage,Literally meaning: Fifth Wind Shadow) so that he can protect the village and all those who live there, in the process dispelling the villagers' and the rest of the world's fears of him.

Gaara is a Military Weapon to be feared. As long as Gaara lives this Village can never be truly at peace. The first Jinchuriki, Bunpuku, was able to temporarily seal Shukaku into a Tea Pot.

Konohamaru and Naruto both participate in the Chūnin Exams hosted by Sunagakure in the Land of Wind. Konohamaru and his team begin in the area set for the second half of the Exam where they are attacked by a monster. Naruto saves them from it and they all make it to the preliminary matches where Naruto is matched up with Konohamaru. Unfortunately, due to the two bickering, both Naruto and Konohamaru miss much of the rules while Temari reads them off. After encouragement from the crowd, Konohamaru starts off the battle by throwing a smoke bomb and then uses Big Ball Rasengan, a technique that Naruto hadn't taught him before. Naruto is able to narrowly avoid it. Then, both of them use the Multiple Shadow Clone Technique and attack each other, Naruto with Rasengan and Konohamaru with kunai. Naruto's clones easily defeat Konohamaru's, and with the smoke cleared, Konohamaru appears face down on the ground nearly being considered unconscious by Shikamaru, the proctor of their fight. Konohamaru gets up and relentlessly attacks Naruto getting beaten and bruised continuously in an attempt to land a hit Naruto. On the verge of mentally caving into defeat, Konohamaru receives cheers and support from the crowd and his opponent. Konohamaru suddenly uses the Shuriken Shadow Clone Technique which forces Naruto to jump up and become exposed to his opponent's Fire Release: Ash Pile Burning. When Naruto lands to the ground, he trips backwards and Konohamaru manages to land a single punch. Though Konohamaru cheers happily that he was able to land a blow, Naruto gets up as he enters Sage Mode. However, learning that the use of senjutsu was deemed forbidden specially for this Chūnin Exam to make it more fair for other genin, Naruto is disqualified while Konohamaru wins by default. In the end, Kakashi, Gaara and the others comfort Naruto by letting him know he can become a chūnin anytime he wants, as he has already surpassed his contemporaries, including Kakashi himself. Just then, it is shown that Konohamaru has passed the exam and officially become a chūnin. He immediately declares Naruto as his subordinate, which drives Naruto crazy. 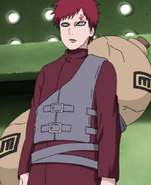