Although Power Girl did not directly appear in the Justice League animated series or the follow-up, Justice League Unlimited, the JLU character Galatea (voiced by Nicholle Tom) is based on her. This character is a clone of Supergirl (also voiced by Tom) created by Emil Hamilton (who sees her as a daughter, while she sees him as a father-figure) from Project Cadmus as a contingency plan in case the Justice League turned against the US. Although the clone resembles Power Girl and wears a similar hairstyle and costume (at one point, she briefly drapes a red workout towel over her shoulder, resembling the half-cape of her comic book counterpart), her personality and origin are significantly different, being a supervillain who seeks the League's destruction. She also possesses a mental link with Supergirl, allowing them to experience each other's recent memories in the form of dreams.

Galatea first appears in the first season's sixth episode, "Fearful Symmetry." She subsequently appears at the end of season 2's "Flashpoint," and she is last seen in season 2's "Panic in the Sky". In her last appearance, "Panic in the Sky," she fights Supergirl for control of the Watchtower. She is defeated by Supergirl, who traps her in a contact, causing all of the Watchtower's power to flow through her, causing an overload. Following the massive surge of electricity, she is left twitching and catatonic; it is unclear whether she ultimately survives. 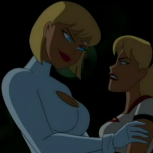 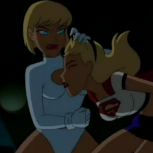 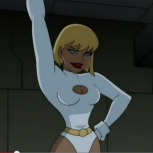 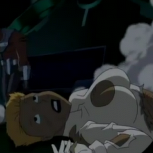 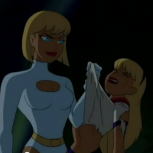 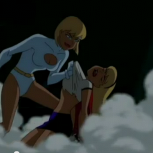 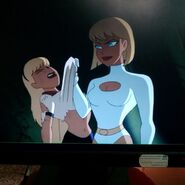 Conversely, this continuity's Supergirl borrows several elements from Power Girl, such as having been in suspended animation (which had not been introduced in the Kara Zor-El mythology at that point) and being a surrogate cousin of Kal-El rather than a biological relative. Also, in her first appearance, in Superman: The Animated Series, when she first meets Jimmy Olsen, she's without a disguise and tells him that her name is "Karen".