God is known as the omnipresent deity, Father of Jesus Christ and as the Creator of life, a central part of the basic tenants in the religion of Christianity. Although the basic concept of God exists in other monotheistic and polytheistic religions, it is the Christian God that serves as the basis for the Family Guy character.

The appearance of the "God" character is the traditional depiction of the Abrahamic God in the Western world: a white-haired Caucasian man wearing a white robe.

The depiction of God on Family Guy is one of the most controversial components of the series. The show's depiction of God is primarily featured in episodes and/or gags satirical to religion, where He is often portrayed in a less-than-flattering if not outright negative, almost sacrilegious light. Some gags depict Him in Heaven, while others have Him appearing as a human being on Earth, interacting with its inhabitants.

Many of the gags featuring God completely revise what has been established in Scripture. For example, in "Untitled Griffin Family History," God uses Chuggs' cigarette lighter to "light a fart on fire," thereby setting in motion the universe's creation as depicted in the Big Bang theory.

In "Fifteen Minutes of Shame", He nearly grants Meg's wish to have God "kill me now," only to have His sniper-style attempt interrupted by a phone call.

Stewie explains to Brian that Jesus didn't really die on the cross in "Stewie, Chris & Brian's Excellent Adventure" as God discovers in a cutaway that it was really due to cocaine and trauma to the colon.

In "Roger Codger", Father Donovan has a swimsuit calendar of God.

God appears to Steve in the form of Angelina Jolie in "Stan of Arabia: Part 2" because he chose the body most appealing to Steve.

Avery Bullock gives Duper God's autograph from the stash of illegal CIA items in "I Can't Stan You".

Stan sees God in his vision of Heaven with Brett Morris in "Dope & Faith".

Stan tried to use a Heaven gun to force God to return him to his family in "The Most Adequate Christmas Ever".

The swimsuit calendar of God from "Roger Codger" appears in Mr. McCreary's office in "The One That Got Away".

God opens the gates to Heaven for Stan and Francine's fantasy in "Hot Water". 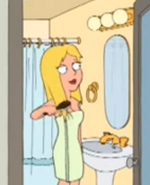