Sacred World of the Kais

Power up to the Very Limit

Does Not Train
Gohan is the Son of Goku Son, and Chi-Chi Son. He is also the husband of Videl Satan Son, and father of Pan Son, his grandson is Goku Jr.. He was trained in the Martial Arts by Piccolo Jr. . Later he has a brother named Goten Son.

After recovering from his injuries in West City hospital, Wukong Hospital, Gohan chose to go to the planet Namek with Krillin and Bulma to gather the Namekian Dragon Balls to bring back his friends back to life, because Piccolo's death caused Kami's death too, which caused the Earth's Dragon Balls to turn to stone. Gohan was on a personal mission to wish back Piccolo, and went so far as to wear a copy of Piccolo's dōgi to honor him.

After their long trip, with a few sidetracks, they finally make it to Namek, where they find out Vegeta has also come seeking the Dragon Balls, along with his former far more powerful boss, Frieza. While scouting the planet with Krillin, Gohan spots Frieza and his minions,Zarbon and Dodoria, tormenting Namekian villagers. When Gohan sees Dodoria, one of Frieza's top henchmen, attack a little Namekian child named Dende, he goes out and attacks him. Afterwards, Dodoria chases Gohan, Krillin and Dende, but they eventually lose him and Vegeta kills Dodoria. Dende leads Gohan and Krillin to Grand Elder Guru, the ruler of the Namekians, where he unlocks both of their hidden potential. Later, Gohan steals a Dragon Ball that Vegeta has hid in a lake for himself, and even tricks Vegeta who runs into him on his way back from retrieving the ball. Vegeta figures this out eventually and becomes enraged, but the arrival of the Ginyu Force makes Vegeta have to form an alliance with Gohan and Krillin in order to get all the Dragon Balls and put up a fight against Frieza's feared Special Forces. Unfortunately, when they gather all of the Dragon Balls, they are ambushed by the Ginyu Force. The weakest of them, Guldo, is to take on Krillin and Gohan, but fails as Vegeta steps in and decapitates him with his hand.

Then, when Vegeta is fighting a losing battle against Recoome, Krillin and Gohan step in and fight, but it is still not enough. Gohan is on the brink of death until Goku shows up with Senzu Beans. Goku takes on the rest of them, but has his body switched by Captain Ginyu. With Goku completely weak in Captain Ginyu's body, Gohan has to try to fight Captain Ginyu in his father's body (although he is initially reluctant to do so, despite knowing it is not his dad, as he still feels he is injuring his dad by doing so). Captain Ginyu is unable to fully figure out Goku's powers and after a short fight with Gohan, Krillin, and Goku in Ginyu's body, Vegeta kills Jeice and ultimately defeats Ginyu. After Captain Ginyu ends up in a frog's body, Gohan and the others gather the Namekian Dragon Balls and wish for Piccolo to be brought back to life on Namek.

Shortly after, Frieza ambushes them, making them stall for Piccolo to come. In the Z Fighters' battle against Frieza's second form, Krillin is injured by the tyrant and is sent into the depths of the water below. Gohan rushes to save his friend from drowning, but Frieza stops him. Getting angry, Gohan attacks Frieza with a barrage of punches and kicks followed by the Gekiretsu Madan (a massive wave of energy blasts) that brings the tyrant to his knees.

When Piccolo (now greatly powered up after fusing with the Namekian heroNail) arrives on the battle field, he fights an even battle against Frieza while Gohan and the others watch in amazement. However, Frieza transforms into his third transformation and gains the upper hand against Piccolo. Seeing this, Gohan becomes enraged and attacks Frieza with the Full Power Masenko, hindering Frieza for a few minutes. Eventually, Frieza manages to deflect the attack back at Gohan, who is saved by Piccolo when he destroys the attack with a Ki Blast. Frieza then transforms into his final form, and as his first act, kills Dende, who had been healing the Z Fighters. Frieza then tries to kill Gohan with a Death Beam, but Vegeta saves the young Saiyan by kicking him out of the way of the blast. Gohan, Krillin, and Piccolo watch in horror as Vegeta gets brutally beaten by Frieza until Goku arrives. In the end, Vegeta meets his end at the hands of Frieza, who kills him with a Death Beam.

Gohan and the others are left on the sidelines while Goku fights an even battle against Frieza. However, things turn bad when Frieza powers up to 50% of his power and gains the upper hand against Goku, who desperately attempts to use the Spirit Bomb. In order to buy Goku some time, Gohan and Krillin lend their energy to Piccolo so he can stall Frieza enough for Goku to complete his Large Spirit Bomb. When Frieza prepares to kill Piccolo, Gohan and Krillin summon up the last of their energy and distract the tyrant with a surprise attack, saving the Namekian's life. Goku then fires his completed Spirit Bomb. It proves successful and Frieza is plummeted into the depths of the Spirit Bomb, heavily injuring him.

Believing the tyrant to be dead, the heroes relax and prepare to go back home to Earth, until Frieza appears on top of a boulder and reveals to be alive. Frieza mortally wounds Piccolo (in the anime, Frieza attempted to fire a Death Beam at Goku, but Piccolo pushed him out of the way and got hit by the laser instead, whereas in manga, Frieza intended to fire the attack at Piccolo), overwhelming Gohan with horror and grief at the presumed death of his mentor and friend. Next, Frieza kills Krillin, by telekinetically blowing him up into pieces, which enrages Goku and allows him to transform into a Super Saiyan. He assertively orders Gohan to take Piccolo and retrieve Bulma and take them to the ship that he traveled in and use it to head back to Earth. Reluctantly obeying his father's wishes, Gohan leaves the battle field with the unconscious Piccolo and manages to retrieve Bulma.

Later, when he senses that his father is supposedly dead, Gohan returns to the fight to stall Frieza before Namek explodes. However, despite his best efforts, he is unable to stall Frieza as the tyrant taunts him and he is not fighting, in addition to Frieza deducing the real reason Gohan is attempting to fight him. However, Gohan then senses that his father is still alive and powers up. Next, Gohan attacks Frieza with a barrage of punches and kicks, knocking him to the ground and finally blasting him with a Super Masenko. Unfortunately, Frieza appears unaffected by the attack and powers up to full power again, saying that Gohan is a true Saiyan and that is why Frieza must kill him. However, before Frieza can kill Gohan, Goku rises up from the ocean below and tells Gohan to get off Namek. Gohan flies away from the fight and encourages his father to win. As Gohan is flying back to the spaceship, he and the others are later transported to Earth by Porunga while Goku is left finishing the battle with Frieza on the dying planet Namek.

After Goku wins the battle, but is caught in planet Namek's explosion, Gohan and the others mourn the Saiyan warrior's apparent death. Months later, they are allowed to use the Namekian Dragon Balls to wish Goku back to life. However, they are shocked after the Eternal Dragon Porunga refuses the wish that Goku be brought back to life, but everyone rejoices once the Dragon explains that Goku did not die from Namek's explosion. During this time of peace, everyone awaits the arrival of Goku, and Gohan goes back to his studies while Piccolo watches over him and his mother.

A year after (two years later in FUNimation dub) Goku defeated Frieza on Namek, Gohan and Chi-Chi still wait for Goku's safe return to Earth. However, things turn bad when the Z Fighters sense Frieza heading towards Earth, along with another powerful being: his father, King Cold. Gohan and the Z Fighters regroup where Frieza and King Cold's spaceship is landing, at Northern Wastelands, but without Goku's help, the Earth appears to be doomed.

However, when Frieza and King Cold land on Earth, they are confronted by a mysterious youth, who transforms into a Super Saiyan and easily destroys Frieza and King Cold along with their henchmen. After the fight, he tells the others to follow him to when and where Goku will be arriving. After waiting two hours (three in the manga), Goku arrives on Earth and he and the youth have a private talk.

The mysterious youth reveals himself as Trunks, the son of Bulma and Vegetafrom 20 years in the future, who has traveled from the future and explained that a pair of deadly Androids will appear and threaten the Earth in the next three years. Future Trunks then gives Goku an antidote for the heart disease he will soon contract. With the conversation over, Future Trunks departs to his future, but promises to meet them again when the Androids arrive. During the next three years, Gohan trains hard with Goku and Piccolo to prepare for the Android threat.

Do Image Training with Krillin.

During the movie "Yo Son Goku and his Friends Return" Gohan coached Goten and Trunks. Close your Eyes and feel out his Ki and use it as a Guide.

Techniques That He Knows 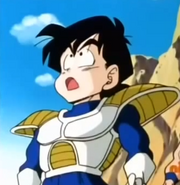 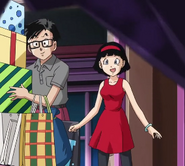 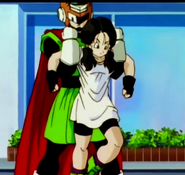 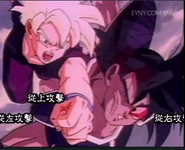