Goten (孫悟天, Son Goten) is the younger son of Goku and his wife Chi-Chi, making him a Saiyan and Earthling hybrid. Goten is Gohan's younger brother and Trunks' best friend.

Goten is the second son of Chi-Chi and Goku, and younger brother to Gohan. He is born nine months after the defeat of Cell in the Cell Games Saga. As Goku dies during the Cell Games, while Chi-Chi is pregnant, Goten does not meet his father Goku until he reaches the age of seven. Goten is not pushed in school as much as Gohan is, and instead is trained in martial arts by Chi-Chi. The reasons for this are never fully explained, but it seems to have something to do with Goku's death.

Goten is incredibly strong as a child, far stronger than either Goku or Gohan ever were at his age. Chi-Chi first discovers that Goten can become a Super Saiyan at only seven years old (the Dragon Ball Z: Buu's Fury video game manual says that he was only three years old when he first went Super Saiyan), and he looks almost exactly like Goku when he first transformed into a Super Saiyan. In the manga, Goten transforming into a Super Saiyan made him the youngest Super Saiyan ever at that point. When Gohan asks how his transformation occurred, Goten said that he was learning Martial Arts from his mom and accidentally turned into a Super Saiyan, so she told him never to transform again. The ease at which he does so has been a matter of controversy, seeing as it took years for Goku, Vegeta, and, to a lesser extent, Gohan to obtain and master the technique. Whatever the reason, Goten displays exceptional power at a young age, rapidly increasing his strength. During Goten's childhood he is good friends with Bulma and Vegeta's son Trunks, who he would have "fight games" with. This serves to increase their respective strength significantly, compared to the other Human-Saiyan hybrids that are seen at that age, and both became a Super Saiyan at a young age.

Goten's first appearance in the series is when he is seven years old. Discovering that his father, Goku, will be returning to Earth for a day to compete in the 25th World Martial Arts Tournament, he trains with his older brother, Gohan, for the event, a section of the training was throwing rocks at Gohan, which Gohan could barely dodge even as a Super Saiyan, showing Goten's amazing power. During this training, it is discovered that Goten has already mastered the transformation of Super Saiyan, and ironically, it is also discovered that Goten is not able to fly (something Gohan describes as "learning how to run before you learn how to crawl"). Gohan trains Goten in fighting and flight, along with his friend (and later on, wife), Videl.

Goten meets Goku for the first time at the tournament. In the manga, he is rather shy upon first meeting his father, but in the anime, he embraces his father and they play airplane for a little bit. Goten then competes in the Junior Division. After defeating Ikose and his younger brother, respectively, Goten and his best friend, Trunks, both make it to the finals. The two powerful, young Saiyan warriors place rules limiting their powers during the fight, prohibiting their Super Saiyan transformations. Trunks comes out victorious, due to transforming, using his left arm, and firing an energy blast from his left hand which knocked Goten out of the ring, all three of which Trunks said he would not do, though Goten also became a Super Saiyan earlier in the fight. With the two boys wanting more of a challenge, they disguise themselves and enter the Adult Division, as Mighty Mask.

After Gohan is attacked, and the Z Team pursues the attackers, Goten and Trunks fight Android 18 and Mr. Satan in a battle royale. They are disqualified when Android 18 exposes them by destroying their costume. Goten and Trunks leave and are informed by Videl that Gohan and the others are in pursuit of an evil wizard named Babidi who is attempting to awaken his monster named Majin Buu.

Goten and Trunks fly toward Babidi's spaceship, and, upon arrival, see that Piccolo and Krillin have been turned to stone by Dabura. Trunks accidentally breaks Piccolo's statue, and is afraid he might have killed him, but Piccolo regenerates himself when Dabura is killed by Majin Buu and he reverts from his stone form, along with Krillin. With Gohan and Goku knocked out, Vegeta arrives to fight Majin Buu, only to be severely beaten by the monster. After saving Vegeta, Goten and Trunks attempt to fight alongside Vegeta, but he knocks the boys unconscious, knowing that Majin Buu is too strong for them to help him. He then blows himself up, hoping that will finish him, but fails, as Majin Buu regenerates himself. Goten is taken to Kami's Lookout to take refuge from Majin Buu's assault on the world.

Babidi makes an announcement to the world to tell that Piccolo, Trunks, and Goten must be found for their interference in the fight with Majin Vegeta earlier, as well as for Piccolo slaughtering Babidi. The boys wake up and attack Mr. Popo. Goku stops them and tells them that Vegeta and Gohan are dead, making the boys cry. Goku teaches them the fusion technique with the remainder of time he has left on earth. Babidi tells the world that he is going to West City to blow it up. Trunks rushes to the Capsule Corporation to get the Dragon Radar. Goku intercepts Babidi and Buu to give Trunks time to get to Capsule Corporation, Goku shows them Super Saiyan 3 and starts to fight Majin Buu. Trunks got the radar and Goku returned to the Lookout. Goku teaches the boys the fusion technique and shows them Super Saiyan 3. Fortuneteller Baba tells Goku his time is up (his time was shortened due to his Super Saiyan 3 transformation) and leaves the rest to Piccolo. Goten hugs his father one more time before going back to Other World.

A day later, with Goku in Other World, Piccolo teaches the boys the rest of the Fusion Dance. After two days, Goten and Trunks are ready to fight Majin Buu. Goten then watches as Super Buu turns his mother into an egg and crushes her, angering Goten and thus prompting him to train as hard as he can.

They fuse and create the warrior Gotenks, who fights Majin Buu twice, almost defeating him. Gotenks is absorbed by Super Buu after Gohan arrives from the Sacred World of the Kais (being there training) to assist the boys. Goten is saved along with Piccolo, Trunks, and Gohan by Goku and the deceased Vegeta, by forming Vegito and making Buu absorb him. Goten dies along with Trunks, Gohan, Piccolo, and the other survivors when Kid Buu blows up the Earth, but he is brought back to life along with the others killed by Buu with the Namekian Dragon Balls. Goten, Trunks, Gohan, and Piccolo are then seen contributing to Goku's Super Spirit Bomb. He meets with Goku once again, with everyone else on Kami's Lookout, after Goku had killed Kid Buu with the Super Spirit Bomb, and watches his parents (Goku and Chi-Chi) reunite and hug each other after Goku tells Chi-Chi he wants to live with her and their kids as a family of four.

Yo! Son Goku and His Friends Return!!

Two years have past since Majin Buu's defeat and Goten is nine years old. The whole Son family goes to Mr. Satan's party, where they meet Vegeta's brother Tarble. Tarble tells them about two brothers who worked for Frieza, Avo and Cado. After pulling the two longest radish in a contest to see who would have to fight Abo and Cado, Goten and Trunks confronts the two brothers. While they are fighting, Goku says they are stronger than Frieza. When Avo and Cado fuse and form Aka, Goten and Trunks use the Fusion Dance to form Gotenks. After a brief battle, Aka starts to destroy everything, but he ends up being defeated by Goku.

Sometime has passed since the defeat of Majin Buu. Goten brings his father lunch while he is plowing a field and takes over for him by riding his tractor while he eats, though Goten becomes distracted by Goku practicing and accidentally goes off a cliff, but is saved by Goku. Goten and Trunks go out and went shopping for a gift for Videl, soon to be married with Gohan. After seen looking for rings, they go out to get Videl cosmetics. They were told by an old man to go to a hot spring and there the water would make your skin feel new.

They find the hot spring and encounter a giant snake. At one point, Goten was furious to the point he begins to use the Kamehameha, but Trunks told him not to because nearby old people were in the hot spring. The snake hits jar with the water but Trunks eventually sends it slithering away. They both get the jar to Videl who seems to like the water and how her face feels after using it.

At the end of the day, Goten tells Goku about his day with Trunks and Goku is proud of them. Mr. Satan arrives and offers Goku 100 million Zeni for defeating Majin Buu. Goku starts to deny the money until Goten reminds Goku that if he gave the money to Chi-Chi, he could go train on King Kai's planet, then Goku takes the money after hearing this.

Goten is at Bulma's birthday party on the Princess Bulma cruise ship, with the others. When Beerus is enraged because Majin Buu ate all of the pudding, he fights him, and blasts him into the ocean. Goten and Trunks fuse into Gotenks, to fight Beerus, but Gotenks is easily defeated by a tap on the forearm. In the manga, Gotenks goes Super Saiyan 3 and is blasted into the ocean.

Later, Goten and Trunks both go Super Saiyan for the ritual to make Goku a Super Saiyan God, along with Vegeta, Gohan, and Videl (who was pregnant with Pan). Goten and the others observe the fight between Goku and Beerus for a while from Bulma's ship, then in Bulma's ship. They couldn't fly on their own, because they were all out of ki from doing to Super Saiyan God ritual. After their battle, Beerus falls asleep in attempt to destroy Earth so Whis takes him home. Goten is curious on how being a god felt for Goku while he was having his big feast. 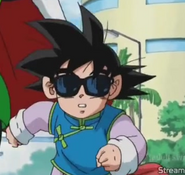 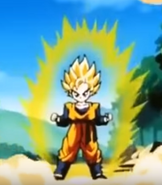