In the 2012 cartoon, Hamato Yoshi (like the 1987 series) was exposed to mutagen and is transformed into Splinter. In the introductory episode "Rise of The Turtles - Part 1-2", Splinter reveals to the turtles that in his life as Yoshi, he married Tang Shen and had an infant daughter named Miwa, and that they were killed in a fire set by Oroku Saki. It was later revealed that Miwa, kidnapped by Saki and raised by him, grew up to be this show's version of Karai. Splinter learned this during a confrontation with the Shredder, and his rage over this act nearly led to Shredder's demise until Karai herself intervened. Hamato Yoshi/Splinter is voiced by Hoon Lee.

When I was a young man, I fell in love with a woman.Her name was tang shen. And I was not the only one who loved her. There was another man competing for her attention Oroku saki. Shredder. One day, he insulted me in front of her. He called me many things. I felt I could not let those insults go unanswered. I lost my temper. And over time, our rivalry festered into hatred Until shredder sought to finish me And I lost my beloved tang shen.

It it wasn't a fair fight. 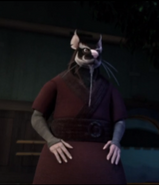