Hanabi is the younger daughter of the Hyūga clan's head, Hiashi Hyūga. While always looking up to her older sister Hinata and wanting to spend more time with her, Hinata's duties as the future heiress of their clan made it hard for the two sisters to have any quality time together. Watching Hinata and seeing her as strong yet so kind, Hanabi aspired to be more like Hinata. Later, Hanabi watched her sister's training, only to witness Neji trying to harm her and he was later stopped by Hiashi, who then activated his curse seal. She was soon approached by her grandfather, who explained that the Hyūga clan must go to extremes sometimes to protect their secrets and everyone has a set path in life that they must endure. Hanabi also spied on Hinata as she would often leave home to watch Naruto Uzumaki from afar, making her wonder why Hinata was so fixated on the social outcast. In the anime, during sparring sessions between Hanabi and her sister, Hanabi's talent began to shine, amazing everyone by being about on par with her older sister despite their age difference. Later, as Hinata's progress began to be questioned, their grandfather suggested training Hanabi to be the heiress, and ultimately, a duel was held between Hanabi and Hinata to decide the future of their clan. While Hinata found an opening to win the fight, she hesitated to strike down her sister, allowing Hanabi to counter-attack and win the duel, much to Hanabi's distaste at hurting her sister.[3]

Ultimately, as Hanabi showed more talent and confidence than her elder sister Hinata, their father decided to make Hanabi the heiress to the clan,[1] and focused his gruelling training regime on her instead of her sister, whose training he considered to be a waste of time.[4] As Hanabi continued to train under her father, believing the words of her grandfather that all are tied to an unchanging fate, Hanabi became determined to prove herself worthy of being the next head of the Hyūga clan.

While unseen to what level, Hiashi noted that Hanabi showed much more potential than her elder sister Hinata, and was more suited for the role of heiress of the Hyūga clan.[4] Her growth-rate greatly impressed her entire clan, making many wonder if she should be the heiress before it was even brought into official question.

From a young age, Hanabi showed strong instincts in hand-to-hand combat. Despite originally not gaining intense training from their father at the time like her older sister, Hanabi soon became able to fight on par with Hinata through sheer solo training. In the anime, she was able to defeat Hinata in their sparring duel (albeit this partial stemmed from Hinata's reluctance to harm her sister).[3] Between her raw talent and rigorous training from Hiashi, Hanabi gradually became very proficient in Gentle Fist. In the anime, during a duel with Boruto, she showed considerable grace and precision, able to effortlessly dodge and parry all of his attacks used alongside his shadow clones.[8] In the anime, she could perform several of her clan's advanced hiden techniques, able to block or repel anything in her immediate vicinity using the Eight Trigrams Palms Revolving Heaven, or attack a target from a distance using the Eight Trigrams Vacuum Palm.

As a Hyūga, Hanabi possesses the Byakugan, a dōjutsu kekkei genkai. While a common trait for her clan, Hanabi's is noted by her father to be very powerful, almost as great as her cousin Neji's.[9] Hanabi herself is also very confident about her Byakugan, claiming that its perception is as good as any fully grown Hyūga's.[10] Toneri Ōtsutsuki described her Byakugan as being "very pure" and specifically targeted her Byakugan in order to awaken the Tenseigan.[10] When activated, it grants her an almost 360° field of vision (except for a small blind spot), x-ray vision, and the ability to see chakra accurate enough to target the chakra pathway system. 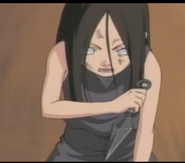