Start a Wiki
The family tries to sneak out before Hayley hears that they are going to the Cheesecake Warehouse, whose sugared foods upset her, but get caught. She wonders why her family doesn't like her but Jeff points out that she doesn't smile much, although Francine notes that she smiled a lot until she was six.

Going through old pictures, she notes that she used to smile a lot but no longer remembers doing any such thing. Roger points out that she used to be “Happy Hayley” and she presses him to help her remember those times so Roger sets her up to see Dr. Penguin. He uses hypnotherapy to send her back to age six, but when Stan interrupts their session, she remains stuck at age six. Stan insists on Roger returning her back but her playfulness causes her to refuse to sit still to be hypnotized again. When she shows a liking for Francine and Stan, they consider keeping her as she is, but Jeff finds it puts a cramp in their marriage. But when he complains, he finds that everyone prefers the new Hayley, although Roger points out that the traumatic event that set her off could return her to normal. Having suffered all week at the hands of "Happy Hayley", Klaus volunteers to help. They find out that at her seventh birthday party, an event set her mood into change and a boy at her party may have the answer.

Tracking down the now grown adult, he locates the picture and it reveals a man clubbing a baby seal on the television. Taking Hayley to the Langley Falls Aquarium at night with Klaus, he hopes that he can snap her out of her childhood without completely returning her foul mood. But when Klaus gets into the seal tank, his life is in danger from being eaten until Jeff is forced to club it to death to save him. Hayley doesn't see the death, although the police do, so Jeff is arrested and put on trial. Dr. Penguin "testifies" at the trial by hypnotizing the jury into declaring Jeff Not Guilty. Hayley's anger at Jeff being released causes her to snap out of her hypnotic state, although she is left in tears at being unable to recount the last several days and her family's amusement. Later, Jeff finds that a small bit of Hayley is able to find a smile when they plan to stop for some mint chip ice cream before a protest.

At school, Steve tells his friends about the trip to Cheesecake Warehouse, which leads to mentioning soft pork and a stranger tells them about slow cookers, and gives them one. Working with the pork, Steve decides that more cooking is even better than the recommended time. The guys are ready to eat after a week, but Steve refuses to let everyone eat. As an old man, Steve eats his pork over the graves of his dead friends until he awakens from a dream of them reaching up to pull him in as well. Determined to set things right, he finds that he must "polish the morning wood" first. Steve treats his friends to their pork dinner, but the now twelve-day-old pork gives them food poisoning which results in Steve having hallucinations of pigs. 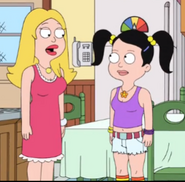 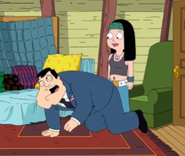 Add a photo to this gallery
Retrieved from "https://xianb.fandom.com/wiki/Happy_Hayley_Smith?oldid=209238"
Community content is available under CC-BY-SA unless otherwise noted.