The Girlfriend of Joker

Harleen Quinzel was a gymnastic prodigy and used her talent to get a sports scholarship to Gotham State University. However, Quinzel was set on obtaining a degree from GSU's prestigious Psychology Department. Despite her failing grades, Quinzel used her feminine charm to garner a doctorate degree.

Quinzel opted to intern at Arkham Asylum for the Criminally Insane under the supervision of Dr. Joan Leland. Leland quickly assumed that Quinzel planned to cash in as a pop psychologist and publish a tell all book on the Asylum's high profile inmates.

Things changed when the Joker manipulated her into beginning a series of sessions. It was in these sessions that the Joker began spinning heart crushing tales of being abused by his father and disguising himself as the victim. Quinzel became captivated to say the least, perhaps of her own choice to repress her desire for personal entertainment in turn to become a career oriented woman. Nonetheless, when the Joker was returned to Arkham after a showdown with Batman beaten, something snapped inside Quinzel. She donned a clown costume reminiscent of her new alter-ego, Harley Quinn, a classical literary character, Harlequin who represented frivolity. Harley Quinn busted the Joker out and she has been at his side ever since.

Harley Quinn is completely dedicated to the Joker, however the Joker's own egotistic drive to kill Batman is a barrier in itself that prevents any of her 'love' to be returned. If anything, Harley Quinn's presence humanizes the Joker and more or less keeps him in check. Harley's lack of humor jilts Joker enough for him to beat her and throw her onto the street. When Quinn commits crimes without the Joker, she teams up with Poison Ivy whom she formed a dysfunctional friendship with.

Harley Quinn and Poison Ivy planned to steal an upcoming federal gold transport but needed extra muscle. They set up a fake Bang Baby outreach, to lure in a metahuman having trouble with their power. In order to mask her identity, Quinn posed as Thalia, the Greek muse of comedy. Allie Langford, their victim, sided with Batman and Static then willingly spared their lives after being reasoned with.

When the Joker briefly held Las Vegas in a state of panic with several high explosives, prompting the Justice League to intervene, Harley Quinn was charged with reporting on the League's progress and their encounters with the Royal Flush Gang. However, Batman managed to convince Harley that she was a patsy and that the Joker only cared about Ace. Batman followed Harley's trail straight to the Joker. After knocking her aside, the Joker and Batman fought once again.

Years later, Harley Quinn aided the Joker in the torture and brainwashing of Tim Drake, the second Robin. Batgirl faced off against Quinn who saw little severity in the steps taken by the Joker. Harley fell to her apparent death. However, she survived, permanently injured. With the Joker dead, she started a new life. Unfortunately, fate is not without some irony. Harley's twin grand-daughters became members of the Jokerz, costumed delinquents that terrorize Gothamites with their gag weapons, under the moniker of Dee Dee.

Harley Quinn possessed above-average agility and fighting skills. She was an Olympic-level gymnast and acrobat.

Harley also carried an assortment of clown-themed tools, although they rarely proved effective.[4] One of her signature weapons is an oversized, wooden mallet which she swings around with surprising skill despite its unwieldy appearance. Another weapon in her arsenal is an oversized revolver with a cork in the barrel. The cork usually contains ropes to tie people up or knockout gas.

Unlike the Joker, Harley could also act sane long enough to appear in disguise as a "normal" person. (She even got paroled from Arkham Asylum once.) Harley's impersonations included a security guard[6] and a lawyer.[10] A different security guard disguise was actually enough to get approval to guard the Joker alone during a police transport.[11]. Due to Harley's charisma and psychiatric training, she is also adept at psychologically manipulating others.

Early in their partnership, Poison Ivy injected Harley with a toxin antidote, which rendered her immune to certain chemicals and diseases,[5] and had the side effect of enhancing her strength and stamina, allowing her to survive normally fatal accidents.[1][9]

Harley Quinn was created by Bruce Timm and Paul Dini, based on (and created for) Dini's friend Arleen Sorkin, who provided the character's voice.[12] "Remarkably", Dini jokes, "she still speaks to me".

The character was so popular that she was eventually incorporated into the DC Comics universe.

There is some conflicting continuity about Harley's origins. Some episodes of Batman: The Animated Seriessuch as "Harlequinade" describe her as a serious clinical psychiatrist who was "rescued" from her boring life by Joker. However "Mad Love", the first full exploration of Harley's origins, portray her as more flaky, whose career as a psychiatrist was still undeveloped when she fell for Joker. Some details of "Mad Love" are fleshed out in the comic the episode is based on, also written by Dini and Timm.

Of Harley's relationship with the Joker, Dini writes:

The producers have confirmed that it was Poison Ivy's stamina inducer that allowed Harley to survive the falls in "Mad Love" and Batman Beyond: Return of the Joker and to survive into old age.

Film director Kevin Smith (Clerks, Chasing Amy, Dogma) was so taken with the character that he named his newborn daughter Harley Quinn Smith. 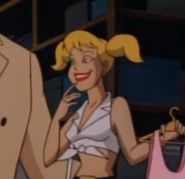 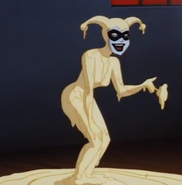 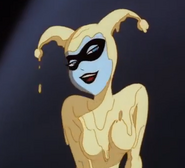 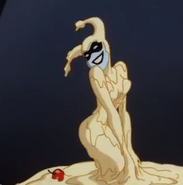 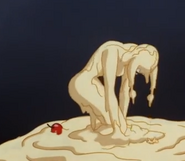 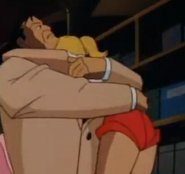 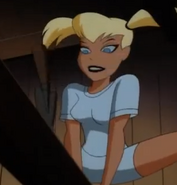 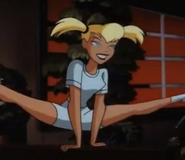 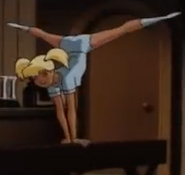 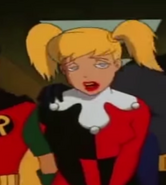 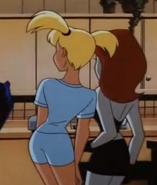