The Helena Bertinelli version of Huntress has appeared in Justice League Unlimited, voiced by Amy Acker.

Helena Bertinelli was the daughter of Mafia crime boss and mobster Franco Bertinelli. As a child, she saw her mother and father murdered by Steven Mandragora, who lusted for power. This event sparked her desire for revenge as, years later in her adult life, she would train herself to become the costumed vigilante known as the Huntress.

She was part of the expanded Justice League roster as a faithful member following the Thanagarian invasion.[2] Huntress was also among the teams sent to contain the Dark Heart

All this time, she lusted for revenge on Mandragora. She infiltrated his mansion and did not hesitate to kill him by shooting all the arrows she has—only he wasn't there. J'onn J'onzz had discovered her intentions and informed the authorities. Huntress was consequently fired from the Justice League.

In her final moments aboard the Watchtower, she managed to persuadethe Question into helping her, in return for information on Project Cadmus. He agreed, and tracked down Mandragora. He was held in a safe house, watched over by King Faraday and his agents, along with Green Arrow and Black Canary, who are on watch outside the building.

But as Huntress and Question are about to make their move, Mandragora's bodyguards, Tony and Cecil, help him escape. Huntress and Question take on the Leaguers, who inform them that they were there in case Huntress might show up. After a short fight, Green Arrow and Black Canary emerge victorious, though mostly because of Black Canary. Realizing Mandragora is gone, the four examine the house. Question picked up a key, which Green Arrow saw. He took the key, and after recognizing it as a locker key, he and Black Canary headed off to the train station. Huntress berated Question and his "mystery man mojo", but he revealed to her that the key wasn't the clue. He had misdirected Arrow and Canary from the real clue—a shipping schedule. One freighter on the schedule was particularly interesting, as it came from Mandragora's home country. They headed for the docks, but found Canary and Arrow were following them—the misdirection hadn't worked as well as they'd hoped. Question lost them by driving in the Midtown Tunnel; Canary and Arrow had to call for an emergency teleport into a nearby body of water in order to evade an oncoming train.

Huntress and Question made it to the docks at the moment the freighter arrived, but found Black Canary and Green Arrow there too. The couples took on each other and later Mandragora, who proves a tough match. Black Canary hits him with her canary cry, which was ineffective, at which point Huntress draws her crossbow on him. As she is about to shoot, a boy runs up. She remembered how she, as a child, had witnessed her father's death, and decided Edgar should not suffer the same. Instead of shooting at Mandragora, she hit a pile of support beams that was suspended from a crane above them. Mandragora was pinned down and wounded, but lived.

As the Mandragoras are carried away by police and child services, Huntress sees that Question had never once believed she could tell him anything about Cadmus. Furthermore, Question knew Edgar would be at the scene and trusted Huntress to do the right thing for the boy's sake. Question confessed to going along with her because he liked her, at which point Huntress kissed him and dragged him away, thus starting their relationship.

The Huntress was a world class athlete, gymnast and martial artist, capable of disarming and defeating multiple armed opponents (however, she was slightly less skilled than Black Canary). She carried an automatic miniature crossbow that she wielded with incredible ease and accuracy, as well as a retractable bo staff and other equipment used to bypass security measures. 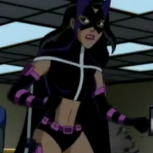 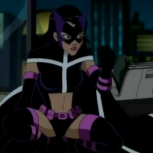 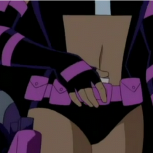 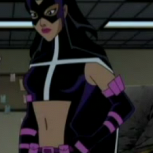