Xianb Wiki
Register
Don't have an account?
Sign In
Advertisement
in: Homo Magi, Army of Light, Mothers,
and 44 more

Deputy Head of the Department of Magical Law Enforcement

Hermione Jean Granger (b. 19 September, 1979) was a Muggle-born witch and the daughter of Mr and Mrs Granger, both dentists in London. Hermione grew up as a normal Muggle girl until, at age eleven, she learned that she was a witch and had been accepted intoHogwarts School of Witchcraft and Wizardry. She began attending the school on 1 September, 1991, where she was subsequently sorted into Gryffindor House, despite having the intelligence to be inRavenclaw. She possessed a brilliant academic mind, with a great possibility of having a photographic memory, and proved to be a gifted student. She was very studious and bookish.

Hermione first met Harry Potter and Ron Weasley aboard the Hogwarts Express. Both boys found Hermione unfriendly and somewhat of an insufferable know-it-all. Later her eagerness to please her professors and her constantly correct answers reinforced their initial impression. However, in spite of the cool relationship between the three, Hermione stepped in to take the blame from Ron and Harry after they had saved her from a troll on Hallowe'en in 1991. Harry and Ron were surprised, but grateful and the three quickly became friends. In her second year, Hermione played a crucial role in the discovery of the Chamber of Secrets before falling victim to thebasilisk unleashed upon Hogwarts following the opening of the Chamber. She was recovered from her petrification under the care ofMadam Pomfrey with the assistance of Professor Sprout's Mandrake Restorative Draught. The following year, Hermione was granted permission to use, and was sent, a Time-Turner from the Ministry of Magic to facilitate her volition to study far more subjects than was possible without time travel. Later in the year, she and Harry would use the Time-Turner to rescue Sirius Black from the Dementor's Kissas well as Buckbeak the hippogriff from execution. During her fourth year at Hogwarts, Hermione became an advocate for the better treatment of house-elves, forming the association S.P.E.W. She also helped Harry prepare for the Triwizard Tournament. In her fifth year, she was the driving force behind the creation of Dumbledore's Army. Later in her fifth year, she fought alongside Harry Potter, Ron Weasley, Ginny Weasley, Luna Lovegood, and Neville Longbottom in the Battle of the Department of Mysteries. In her sixth year, she fought in the Battle of the Astronomy Tower and, at the beginning of what would have been her seventh year, the Battle of the Seven Potters in 1997.

Hermione and Ron both decided not to return to Hogwarts for their final year of studies and instead chose to accompany Harry on his quest to find and destroy Lord Voldemort's Horcruxes. She then fought in, and survived, the Battle of Hogwarts, as well as destroyingHufflepuff's Cup, a horcrux, using a basilisk fang found in the Chamber of secrets then opened by Ron imitating Harry saying "open" in Parseltongue.

Following the Second Wizarding War, Hermione went back to Hogwarts to complete her education. Later she found employment with the Ministry of Magic, furthering the cause for the better treatment of house-elves, before being promoted to the Department of Magical Law Enforcement. She eventually married Ron Weasley, and together they had two children: a daughter, Rose, and a son,Hugo. Hermione became the godmother of Harry and Ginny Potter's eldest son James and their only daughter, Lily.

Hermione achieved high academic prestige when she obtained ten O.W.L.s, in Charms, Defence Against the Dark Arts, Transfiguration, Care of Magical Creatures, Arithmancy, History of Magic, Herbology, Astronomy,Potions, and Ancient Runes. She received 'Outstanding' marks on each of them, except Defence Against the Dark Arts, in which she received an 'Exceeds Expectations,' which she dwelt upon; Ron found it amusing that she actually seemed disappointed by this.

By the time they arrived in Hogwarts, Hermione's romantic feelings for Ron had become obvious, and she was upset when he and Lavender started flirting. Hermione and Ron's relationship suffered greatly in their sixth year, when Ron became envious of both Hermione and Harry, who were invited to be members of the Slug Club, a group of students favoured by Potions professor Horace Slughorn, while he was ignored. He was mollified when Hermione revealed that she was going to ask if he wanted to attend Slughorn'sChristmas party with her, and according to Harry the two seemed on their way to a romantic relationship.

However, during an argument with his sister, Ginny humiliated Ron about his inexperience with the opposite gender and told him that Hermione had kissed Viktor Krum during their earlier romance. Ron subsequently began treating Hermione coldly, much to her bewilderment. He became even angrier with her when she believed that Harry slipped Ron Felix Felicis to assist in his Quidditch-playing abilities, despite having believed it initially himself, accusing her of having no faith in him when it was discovered that he had not been slipped the potion at all. All of this culminated in Ron beginning a very public relationship with fellow Gryffindor studentLavender Brown (Hermione was always insecure around Ron). When she found out about Ron's relationship with Lavender, she conjured a flock of wild birds to attack Ron. After this, Hermione went to the aforementioned Christmas party with Cormac McLaggen to get back at Ron, but it did not go well due to the former's impoliteness. Afterwards, Ron (who was relieved that Hermione and McLaggen's date did not go well and who was growing discontent in his relationship with Lavender) attempted to speak to Hermione, but she ignored him, still upset and angry over his previous treatment of her.

The two reconciled after Ron was hospitalised due to consuming poisoned mead, an event that left Hermione shaken and frightened. After the incident she remained unusally quite and subdued. While sitting at Ron's bedside Ron subconsciously muttered Hermione's name. By this time, Ron was visibly disillusioned with his relationship with Lavender, who had become possessive of him and called him by the annoying nickname "Won-Won." He was also pleased whenever Hermione visited him in the hospital wing.

He began avoiding Lavender, who soon became suspicious of his relationship with Hermione, ultimately leading to an argument about her. After Lavender saw Ron and Hermione come down alone from the boys' dormitories (Harry was under the Invisibility cloak) she had a fight with Ron and broke up with him. After Ron told Harry and Hermione about breaking up with Lavender, Harry could have sworn he saw Hermione smirk. Afterwards, Hermione and Ron were more comfortable together, and their relationship improved considerably, although a romantic relationship remained out of their reach. Hermione comforted Ron after he failed hisApparition test because he Splinched half an eyebrow, while he teased her about the instructor's praise for her flawless performance. That year, Hermione also quickly mastered non-verbal magic.

Throughout the year, she and Ron were both sceptical of Harry's claims that Draco Malfoy had been branded with the Dark Mark and was up to something. Moreover, Hermione was confident that Malfoy couldn't have brought any Dark objects into Hogwarts without alerting Filch. Hermione also strongly disapproved of Harry using the textbook of the "Half-Blood Prince" to get ahead in Potions unfairly, though she did not turn him in. She was particularly alarmed by the increasingly Dark nature of the magic in the book, such as the spellSectumsempra. Near the end of the school year, Harry's suspicions would be proven right. Malfoy let Death Eaters into the school, resulting in the Battle of the Astronomy Tower. Hermione fought in the battle and remained unscathed thanks to some Felix Felicis,[10] which Harry told her, Ron, and Ginny to drink beforehand. Also throughout the school year, Hermione as well as Ron had been informed of the content of Harry's private lessons with Dumbledore. Through these lessons Harry and in turn Hermione and Ron learned about Lord Voldemort's Horcruxes.

During the funeral of Albus Dumbledore, Hermione was comforted by Ron and cried on his shoulder. Afterwards, Harry told them about his desire to drop out of Hogwarts to hunt Horcruxes, which were the key to defeating Lord Voldemort. Despite his protests, Hermione and Ron promised to forgo their seventh year of school in order to assist Harry. Before leaving the school, Hermione was able to Summonbooks about Horcruxes from Dumbledore's office, where the late headmaster had kept them after the subject had been banned at Hogwarts.

Hermione proved to be a witch of exceptional skill, ability, power and talent. Even before she began her education at Hogwarts, she practised some simple spells which all worked.[6] Professor Remus Lupin, who taught Defence Against the Dark Arts in her third year at Hogwarts, claimed that Hermione was the cleverest witch of her age he had ever met;[9] a notable remark, considering that Remus once shared classes with the very talented Lily Evans in his days as a Hogwarts student. The British witch's magical capability easily surpassed almost very single student in her year, challenged only by a select few. Hermione was considered a "borderline genius"[19] and was the most talented witch in her year at Hogwarts.

"One of my best friends is Muggle-born, and she's that best in our year."
—Harry Potter to Horace Slughorn regarding Hermione.[src]

"You're a little scary sometimes, you know that. Brilliant. But scary."
—Ron Weasley to Hermione in their first year.[src]

Harry Potter: "It's better we wipe their memories."
Ronald Weasley: "You're the boss. Hermione...you're the best at spells."
— Harry and Ron discussing what to do with Dolohov and Rowle after the Luchino Caffe Duel[src]

"...Only Hermione Granger had made any difference to her match; Professor McGonagall showed the class how it had gone all silver and pointy..."
—Hermione's achievement during her first Transfiguration lesson in 1991[src] 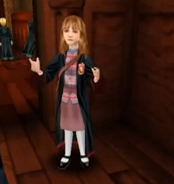