She is the former lieutenant of the 12th Division under Captains Kirio Hikifune and Kisuke Urahara, and currently a Visored.

Approximately 110 years ago, Hiyori was the lieutenant of the 12th Division under captain Kirio Hikifune until the latter's promotion. When Captain Shinji Hirako of the 5th Division arrived at the 1st Divisionheadquarters for the promotion ceremony of Kisuke Urahara, Hiyori, opening the door, attacked him. She got knocked on the head by CaptainLove Aikawa, who stated she should apologize, which only prompted Hiyori to question his authority in disciplining her. Love stated since her captain was not present, someone had to keep her in line. Regardless of Love's attempts to get her under control, Hiyori insisted she would not apologize.[5]

Later, Hiyori waited with the other captains as the newly appointed 12th Division captain, Kisuke Urahara, arrived to the meeting. Hiyori, looking on, was unimpressed upon his arrival.[6] Later that day, when Urahara formally introduced himself to the 12th Division and Hiyori, she, flat out telling him she would not accept him as her captain, slapped away Urahara's hand, which shocked him. Stating she already could not stand that Captain Hikifune left without a moment's notice and now they had to deal with a 2nd Division member as their captain, she noted he was from the Onmitsukidō, so he was most likely a sneaky murderer.

When the other 12th Division members tried to tell her she was going too far, Hiyori stated she was only saying what they were all thinking, though the other 12th Division members refused to side with her opinion. When she confronted Urahara, trying to get a rise out of him, he, laughing it off, told her he has already been made the captain of the 12th Division. He explained he had already decided the role he would play would be their captain, and no longer a member of the 2nd Division. Urahara told Hiyori if she had a problem, it was hers to change. Hiyori, kicking him in his crotch, ran off, only succeeding in injuring her foot.[7]

While walking around the 12th Division barracks, Hiyori, becoming irate when she found the division moving Urahara's vast amount of personal items, got into another confrontation with him when he tried to be of aid to her. The following day, at a division meeting, Urahara revealed he had decided to change the policy of the 12th Division, but had yet to determine what course of action he thought would be a good role for them. Becoming increasing angry upon hearing he was still thinking about it, Hiyori attacked him. Later, she was walking around the 12th Division barracks when she was confronted by Shinji. They got into a small argument, and Hiyori attacked him for saying something Urahara commonly said which she could not stand. Confronting Urahara, she challenged him to a fight, which he accepted, but asked that they fight hand-to hand. As they prepared to fight, Urahara told her to attack him from any angle. Hiyori, running at him, kicked him square in the face.

Hiyori ran off, and at the entrance to the division headquarters, she realized Urahara, seeing through her attack, moved out the way and back in place so she would hit him. She became confused as to what drove this action.[8] The following morning, she arrived at the captain's chamber. As Hiyori became enraged at how Urahara had changed the room from its former state, he, trying to calm her down, told her in getting to know him, he would get to know her. Undeterred, Hiyori attacked him, but he, brushing it aside, asked her to accompany him to the Nest of Maggots.[9]

Hiyori accompanied Urahara onto the2nd Division grounds, where he proceeded to explain to her the purpose of the detention unit and what truly happened to those found under their jurisdiction. He further explained what the Nest of Maggots was and what function it entailed. Upon entering the facility, Urahara, telling her the inmates were not permitted to leave, but they were still free within the facility, warned her to be careful, as the inmates could become violent. When Hiyori asked what they did, Urahara told her "nothing", causing Hiyori to question the methods, but Urahara explained to her the dangers these inmates could bring and why they were imprisoned, making note of the true dealings of what happened to those who withdrew from service in the Gotei 13. Urahara explained though the people in the facility were possibly dangerous, he had always felt that, given a suitable outlet, they could channel their power into something more productive.

When one of the inmates tried to attack Hiyori, she realized she could not fight, as she had left her Zanpakutō behind. Easily stopping the inmate, Urahara apologized, as he had noticed she had left her Zanpakutō behind and had chosen to say nothing. He made note that in the facility, they were not allowed to carry weapons, so hand-to-hand combat mastery was the key.[10] When this prompted the other inmates to attack, Urahara, easily defending himself, took out all his attackers, much to Hiyori's surprise. Eventually, one of the inmates, trying to take Hiyori hostage, was quickly overwhelmed by her as she demonstrated her own capabilities in hand-to-hand combat.[3]

Urahara told Hiyori they were going to meet the only inmate who was so dangerous he required his own cell, Mayuri Kurotsuchi, whom Urahara asked if he wanted to leave the Nest of Maggots.[11] After Mayuri and Hiyori got into a small argument, Urahara, explaining she was his lieutenant, asked Mayuri for an answer to his proposition. He revealed that in his capacity as the captain of the 12th Division, he had decided to make an organization; the Shinigami Research and Development Institute. Hiyori was surprised and further amazed he would put such a dangerous criminal in the line to a position of power.[12]

9 years later, Hiyori was with Urahara and now 12th Division 3rd Seat & Vice-President of the Shinigami Research and Development Institute, Mayuri Kurotsuchi. The trio were greeted by Captain Shinji Hirako and Lieutenant Sōsuke Aizen. Beginning to inform Urahara of current events, Shinji was attacked by Hiyori, who claimed he did not say "Hi" to her. The two got into a fight which left Aizen to explain to Urahara the 9th Division had been sent on a special investigation to find out what was happening with the disappearances in Rukongai.[13]

During her time as a member of the Institute, Hiyori served as a lab manager while clashing with then 3rd Seat & Vice-President of the Shinigami Research and Development Institute Mayuri Kurotsuchi over who had more authority under the captain. The two got into an ongoing argument about who was in charge, prompting Hiyori to call in Urahara. He explained to her that, with the disappearances occurring, he had created a new type of Gigai. Before Hiyori could respond, they were interrupted by the arrival of Tōdō, the 6th Seat of the 9th Division. Agreeing to send a researcher over to the investigation site as per the request of Captain Kensei Muguruma of the 9th Division, Urahara elected Hiyori to go to the site. When she, becoming irate, asked why he could not send someone less important, referring to lab assistant Akon, he asked if she should continue being a lieutenant, prompting Hiyori to attack him, though he simply dodged her. Though reluctant, Hiyori gave in once Urahara explained she was the only one he could trust with the task.[14]

Some time later, Hiyori was running for her life from a shadowed creature, which was revealed to be a Hollowfied Kensei. Just when he was about to deal her a devastating blow, his attack was deflected by the arrival of Shinji Hirako.[15] Moments later, a team of various captains and lieutenants who were sent to investigate the disappearance of Kensei's Division arrived. They began to attack Kensei and a Hollowfied Mashiro Kuna, lieutenant of the 9th Division. In the midst of this, Shinji, picking up Hiyori, pulled her out of harm's way.[16] Gathering after the fight, the investigation team talked about the situation. Starting to cough, Hiyori became Hollowfied herself. A darkness fell around the rescue squad, and they were attacked by an unseen assailant.[17]

The assailant was found to be Kaname Tōsen, Kensei's 5th seat, who was acting under the orders of Sōsuke Aizen, who was the one behind the disappearances and Hollowfication experiments.[18] Just as Aizen gave the order to kill the Hollowfied Shinigami, Captain Kisuke Urahara and CaptainTessai Tsukabishi, arriving, saved them from destruction. Aizen, Gin Ichimaru, and Tōsen made their escape, and Tessai used Forbidden Kidōto preserve and transport them to the 12th Division barracks. In his lab, Urahara tried to reverse the process using his creation, the Hōgyoku,[19]which ended up as a failed process, not having the effect Urahara expected.[20]

The next day, Urahara and Tessai were arrested under the orders of theCentral 46. The Hollowfied Shinigami were sentenced to execution as Hollows. Before any of their sentences could be executed, both were rescued by 2nd Division Captain Yoruichi Shihōin, who brought them to a secret underground area.[21] In this secluded area, she had brought Hiyori and the other Hollowfied Shinigami, along with the prototype for the new Gigai which Urahara was working on. With this epiphany, Urahara resolved to make ten Reiatsu-blocking Gigai to help him, Tessai, and the eight victims escape to the Human World, where they would find a way to undo the Hollowfication process.[22] 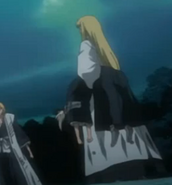 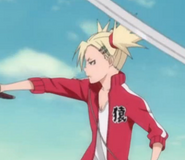 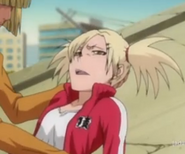 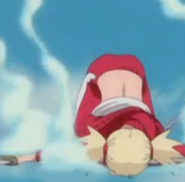