Start a Wiki
Honey Bee (voiced and portrayed by Kym Whitley) is one of Black Dynamite 's sidekicks. She can fight evil. She has martial arts skills. Honey Bee is a part of Black Dynamite's team that assist him in dangerous situations.

Honey Bee is an African American woman. Her hairstyle is an Afro and she has brown eyes.

She wears a gold-like shirt, brown pants, and orange earrings. She resembles the old era of African Americans and the new fighting styles, such as martial arts. She appears to have the largest breasts in the series.

Like Black Dynamite, Honey Bee is brave. She also show respect, has hope, and sees a brighter future. Although Honey Bee is kind, she can be dangerous. She is fiercely protective of the kids at the Whorephanage and will protect them to the end. She also cares deeply about her friends, including Black Dynamite. It is unknown if she has a relationship with Black Dynamite.In the first episode "Just Beat It or Jackson Five Across Your Eyes" when she and the rest of the crew attacked a ninja base by bombing it. However, because of the absence of Cream Corn , she and the rest of the team where unable to escape; they had to fight waves of ninjas that surrounded them, while Cream Corn was saving Michael Jackson from a so-called assassination. After the fight, the team visited Cream Corn at the hospital after he dived in front of Michael Jackson, taking the bullet fired by Michael Jackson's dad, Joseph Jackson. She, Bullhorn , and Cream Corn took great liking into Michael Jackson. Later, after discovering Cream Corn was the subject of physical abuse by Michael Jackson and that Michael Jackson was an alien trying to take over the world, Black Dynamite's crew lead the ninja's they fought earlier into battle against Michael Jackson's alien race.

In the next episode "Bullhorn Nights or Murder She Throats", Honey Bee is also seen at the place where Bullhorn's cousin, Ringo Mandingo, was chopped to pieces by a chain saw. 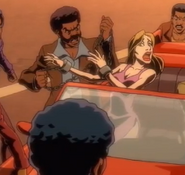 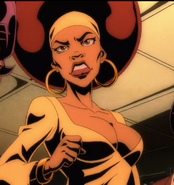 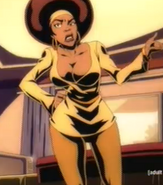 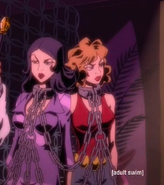 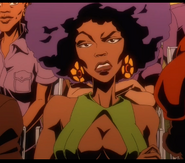 Add a photo to this gallery
Retrieved from "https://xianb.fandom.com/wiki/Honey_Bee?oldid=289396"
Community content is available under CC-BY-SA unless otherwise noted.