She is Snots Sex Slave.

Honey is the blond prom-date-gone-wrong for Snot when he and Steve attempt to clone dates using CIA technology in "Steve and Snot's Test-Tubular Adventure". Honey is cloned from a pubic hair found inside a pair of panties, but instead of receiving teenage dates whom they hope to have sex with, they instead find themselves with a pair of infants on their hands.

When they drop the infants off at a daycare run by one of Roger's personas, they return to find the girls have grown to the physical appearance of five-year-olds. They continue with their plan and allow the girls to grow their bodies into the correct physical age. But on the big night, they find they have developed parental feelings for their clones and decide not to follow through on the sex. But when Steve leaves Snot alone for a moment, he finds Snot has taken off with Steve's clone Glitter, reasoning that he has no parental connections to her. While Steve pursues Snot, Stan deduces that the boys have made clones and is forced to kill Honey to keep the CIA's secret, leaving Snot to later cry over the body of his girl. 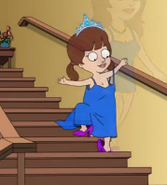 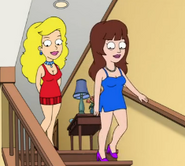 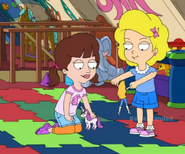 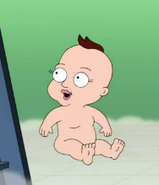 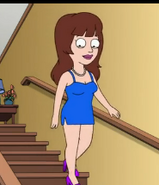 Add a photo to this gallery
Retrieved from "https://xianb.fandom.com/wiki/Honey_Lonstein?oldid=422494"
Community content is available under CC-BY-SA unless otherwise noted.