Indra Ōtsutsuki‎ (大筒木インドラ, ‎Ōtsutsuki Indora) was the first born son of Hagoromo Ōtsutsuki. He was initially thought to be the most suitable successor of his father's teachings, however, it was his younger brother Asura that ended up inheriting this mantle — a decision that would lead the two brothers to fight against each other. Indra is also credited with being the creator of ninjutsu, and the progenitor of the Uchiha clan.[1] 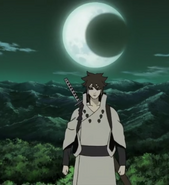