She is a citizen of Konohagakure's Yamanaka clan and a member of the Allied Mothers Force.

She possesses a calm, and collected demeanour. She also appears to be very regal, and has a classy appearance, and a similar style of vocabulary to compliment it. Despite this, she is a fierce fighter and as part of the Allied Mothers Forces, will not hesitate to protect the children and village against potential enemies.

She has light brown eyes without pupils, and brown hair which is tied into a bun with a red ribbon in it. Strands frame both sides of her face, hanging over her ears from behind them. She is fair skinned, and slight wrinkles are visible near her mouth. Her attire consists of a dark teal elegant dress, which sports an aquamarine coloured gem below the collar.

With the majority of the shinobi away from the village, Ebisu gathers the women and children of Konoha where he discusses their current situation. When the Sumo Wrestlers attack the village, she and the other mothers drove them off and watched on as Konohamaru defeated them with a Rasengan.[1] 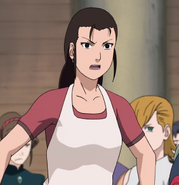 Add a photo to this gallery
Retrieved from "https://xianb.fandom.com/wiki/Ino%27s_Mother?oldid=349162"
Community content is available under CC-BY-SA unless otherwise noted.