Battle City Tournament
Ishizu Ishtar (イシズ・イシュタール Ishizu Ishutāru) is a character in the Yu-Gi-Oh! manga and the anime. Her name is sometimes rendered by fans as Isis Ishtar (as "Ishizu" is the pronunciation of the name "Isis" in Japanese). Her name is derived from the Ancient Egyptian goddess Isis and the Ancient Mesopotamian deity Ishtar. She is the modern day version of Priestess Isis. Ishizu is portrayed as a kind, wise, compassionate, spiritual, and intelligent woman displaying strong maternal characteristics who exhibits a selfless concern for the well being of others.

She is solicitous about the welfare of her family members and those around her, especially her brother Marik (particularly when she joins the Battle City tournament to try to save him), and is loyal to her family's duty to the Pharaoh. Spiritually, Ishizu is known for preaching her beliefs in the nature of fate and destiny, whether its through following her visions, predicting the future with her Millennium Necklace, or remaining committed to her family's destiny to serve the pharaoh.

Ishizu wields the Millennium Necklace, a powerful ancient Egyptian artifact which affords her certain powers to foresee into the past and future. Ishizu became a museum curator working for the Egyptian government agency, the Supreme Council of Antiquities in order to lure Yugi Muto and Seto Kaiba to her in order to prevent Marik and the Rare Hunters from fulfilling their plans. In spite of her brother's betrayal of the family, she believes that there is still a sufficient amount of good left in his heart. 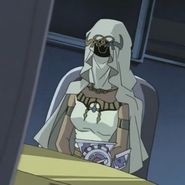 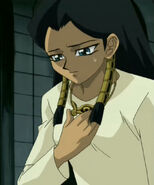