Jackie Wallace was the daughter of Tony Maychek, adopted by his business partner Bill Wallace.

Jackie was young when her mother died, and only around seven when her father was killed in a gruesome accident. Bill Wallace, her father's business partner, adopted her. He raised her as his own, but did not tell her all the details of her father's death, as it wouldn't have made a difference.

Jackie grew up to be a popular and sportive girl, excelling in soccer and cheerleading, but there where signs that troubled her. She had the feeling she was being watched, and didn't like being alone. She invited friends over often, hoping that whatever it was, it wouldn't move against her. Terry McGinnis found out what it was: a strange earth creature. It didn't help much; Jackie was still afraid. She was glad Terry and Dana watched out for her. The next day, Bill took them on a trip to a new lot he had acquired, but at that moment, a quake hit the area. The ground spew up fountains of rock and a vat of chemicals. Rock creatures rose from the ground. Batman managed to save them.

At home, Jackie was surprised to see Bill pack. He had no time to explain, and wanted to leave Gotham City the sooner the better. As he dragged her through the house, a shadowy figure appeared before them. Bill thought he knew what it was—Tony Maycheck. He broke down and finally told Jackie the true nature of her father's supposed death, and that he might now be after him. Fortunately for them, the shadowy creature wasn't Tony, but Batman. However, Tony, the Earthmover, was near. Bill fled in his car, but the ground swallowed him whole. Jackie was still inside, but wasn't safe either, as the entire house suffered the same fate.

Jackie explored the darkness with a light stick, hoping to find a way out. But everywhere around her was mud. Through a crack in a wall, she came to a cave. Following it, she found the remains of her father—but he was still alive in some way. The chemicals had bonded him to the earth around him, and served as his new blood. Jackie tried to reason with him, but he wouldn't listen. He brought Bill in, blaming him for everything, accusing him of killing him on purpose and stealing his daughter. Jackie did not allow for her first father to kill her second, but an earth monster pulled her away from Bill. Batman took out the monster, and others, and pulled Jackie and Bill to safety. As they fled to the Batsub, Jackie was pulled back by Earthmover. Underneath her, a gigantic earth golem rose from the ground. Batman threw Bill out of harm's way before engaging it. He managed to free Jackie by giving Earthmover an overdose of the chemicals, causing him to lose control of the creature. Before they got away, Jackie had one last look for her father. Earthmover did not give up. He blocked the entries of the under water river, giving them no means to escape. But Tony could not see his daughter suffer. In the end, he freed the rivers before fading away. With the entire affair behind her, Jackie grew more towards Bill. She finally considered him her father rather than a ward.

During the Eggbaby assignment, Jackie was partnered with Steven Tetsuo. 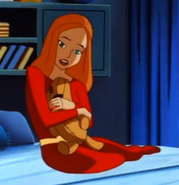 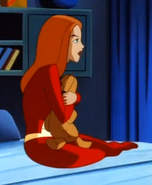 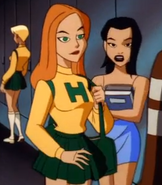 Add a photo to this gallery
Retrieved from "https://xianb.fandom.com/wiki/Jackie_Wallace?oldid=374891"
Community content is available under CC-BY-SA unless otherwise noted.