The Savior Has Come

Jaco Teirimentenpibosshi (ジャコ・ティリメンテンピボッシ, Jako Tirimentenpibosshi) is a klutzy expendable member of the Galactic Patrol who is a super elite. To the public on Earth, Jaco is known as Mask Man.

Jaco is an alien with a mainly light blue head, save for his purple scalp. He has yellow eyes, and his nose and mouth are very human. His entire body is purple as well. According to Jaco, he is the third shortest out of the 38 Galactic Patrolmen,[1] at 148 cm (4' 10¼").[2]

Jaco is an alien who has a large amount of pride in his duties.[3] He is also somewhat blank, as he was willing to use an Extinction Bomb to wipe out humanity just because Omori criticized them. He also views anyone who cannot live up to his expectations as inferior.[4] However, this idea may be due to his extreme loyalty to his planet, so he will agree with their views on humanity. He also tends to get panicked quite easily.[5] He also hates to be called short, as he nearly killed a civilian for it.[6] 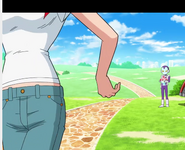 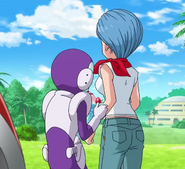 Add a photo to this gallery
Retrieved from "https://xianb.fandom.com/wiki/Jaco?oldid=371285"
Community content is available under CC-BY-SA unless otherwise noted.