Little is known about the 19 year old assassin known as Cheshire. At age 13, Jade Nguyen abandoned her younger sister Artemis Crock after their mother went to prison. Refusing to live with just their father, she disappeared like the Cheshire Cat from "Alice in Wonderland." Donning a cat mask, she protected her identity from clients and targets, alike. Among other things, she has an extensive knowledge of poisons and toxins and is armed with shurikens, a steel bo, a pair of sai, and gas pellets. Her cat mask can see in multiple spectrums, aiding her tracking skills. According to the Justice League database, Cheshire has an exact height of 1.67 meters or five feet, six inches.

Cheshire eventually became a member of the League of Shadows. On July 8th, Cheshire was one of four assassins assigned to murder chief officers of companies with business ties to Project Cadmus. On August 8th, she was routed to Happy Harbor to stop Dr. Serling Roquette from uploading a virus that could stop the Shadows' latest weapon. Cheshire was the first to arrive and easily infiltrated the Happy Harbor High School, where Roquette was hiding. After failing to stop the scientist, Cheshire spared her life and was confronted by Artemis. She appeared to have some knowledge of who Artemis was. Unable to compromise her position, Artemis let her go. Cheshire disappeared in a cloud of smoke.

On September 7th, 19:20 National Standard Time (NST), Cheshire attempted to assassinate Lex Luthor, who volunteered to act as an independent arbitrator for North and South Rhelasia at a peace summit in Taipei. She was stopped by Red Arrow and taken into police custody. While Arrow attempted to interrogate her, Sportsmaster appeared and liberated her. Cheshire was brought before Ra's Al Ghul and ordered to complete her mission. She developed an fondness for Red Arrow but remained undistracted. Cheshire infiltrated the peace summit again and disguised herself as the person to present tea to the two nations' leaders. Aqualad sighted her and shielded the crowd from attack. It seems with the mission goal a success, Cheshire was spared execution per League rules. On December 5th, Cheshire was ordered to work with Sportsmaster in Orleans Parish. She engaged Artemis then the rest of the Team present. Cheshire distracted them long enough for Sportsmaster to leave with his attache case, kissed Red Arrow, and vanished. She later fought them again in New Orleans.

On December 30th, Cheshire was sighted at Ashfield Regional Airport carrying the containment case from New Orleans. Her identity was flagged and a Justice League alert was triggered. Cheshire's jet didn't follow its flight plan and flew under the radar. The Watchtower auto tracked the jet and recorded the crash in the Smokey Mountains. The Team arrived to investigate the crash site but were ambushed by several villains. Cheshire fought Artemis but saved her younger sister from a landslide caused by Superboy. She then vanished and later appeared on Santa Prisca with Artemis. When the Team gained the upperhand on the villians and Sportsmaster was immobilized, Cheshire disappeared into the jungle. On December 25th, 20:02 EET, Team Year Two, Red Arrow got through another encounter with Cheshire, this time in Athens while tracking Lex Luthor's operations. Arrow concluded Cheshire was the key to infiltrating the League of Shadows and getting closer to the Light. He decided he would throw the next fight.

In Team Year Three, Cheshire convinced Sensei Red Arrow had gone rogue and operated as a freelancer. On November 26th, 23:19 UTC, Cheshire and Red Arrow finished chaperoning a shipment of LexCorp tech to Bialya. As months passed, Red Arrow didn't think Cheshire was the psychopath everyone thought she was and it was all just a front to keep people at a distance. Like Artemis, Arrow came to see the good in her but still couldn't trust her. On May 26th, 03:16 ECT, Cheshire saved Red Arrow's life after his cover was blown, but betrayed the League of Shadows in the process. They barely escaped alive and made their way through Fort-De-France. Arrow wasn't sure if Cheshire was playing him or not. For the rest of the year, they hit LexCorp subsidiaries across the world, including Singapore, Santa Prisca, and Germany, in search of Speedy. On November 30th, 22:22 Central European Time (CET), they finished searching the last subsidiary, located in Geneva. At some point, Cheshire married Red Arrow.

On January 28th, 20:00 EST, Team Year Five, Cheshire and Arrow got into another fight, while in Washington, D.C., over Speedy. Cheshire believed the trail was officially dead and Speedy was probably dead, too. She also pointed out Arrow was obsessing over him. By February 15th, Cheshire left Red Arrow for good and returned to a life of crime. On February 17th, Cheshire supervised a unit of League of Shadows ninja assigned to search Dr. Sandsmark's dig site near Olympia for a recently unearthed fragment of the Tiamat statue. At 07:15 Eastern European Time (EET), she encountered Alpha Squad. Artemis once again attempted to appeal to her. Cheshire brushed her off and dispatched the Shadow ninja. Alpha moved through the dig site and followed a signal to a Greek amphitheatre where they played back a recording sent by Dr. Sandsmark. Cheshire was perched atop a column overlooking the amphitheatre. Once Alpha realized Cheshire's team hadn't found the fragment yet, Cheshire leapt down and attacked. Once Alpha defeated Cheshire, they conferred with Aquagirl and left for Athens.

Cheshire kept her pregnancy a secret. In September Team Year Five, Cheshire gave birth to a daughter and named her Lian, after Artemis' middle name. On February 14th, Team Year Six, Cheshire returned to Red Arrow and presented their child to him and news she got one last lead on Roy Harper. On February 28th, 23:14 Beijing Time (BT), Cheshire took her daughter along on a mission with Red Arrow to Tibet in search of Roy Harper. Together, they took out armed monks in a monastery and found Roy Harper. On March 21st, Cheshire swore vengeance on Aqualad for murdering Artemis. On April 9th, 07:12 Indochina Time (ICT), Cheshire extracted Sportsmaster from his meeting with the Light in Western Mongolia.

On May 27th, Cheshire and Sportsmaster entered the Manta Sub. She made her way through the ventilation system to Kaldur'ahm's room. After taking out a Manta Trooper, she met some resistance from a powerless Miss Martian. With the security camera disabled, Kaldur'ahm revealed himself and that Artemis was alive aboard the Manta Sub but Cheshire didn't believe. She was interrupted when Black Manta blew up the entry. Cheshire survived the blast and electrocuted Black Manta unconscious. Miss Martian brought her to the mental plane with Sportsmaster, Kaldur'ahm, and Tigress then revealed the truth. Cheshire believed Artemis was alive and posing as Tigress. She decided not to kill Kaldur'ahm and played along then left the Manta Sub. On May 28th, 02:34 EDT, Jade Nguyen returned to the Crock apartment in Gotham to pick up her daughter from Paula Crock. Nguyen decided to tell Crock the truth about Artemis. After the Reach was defeated and the world saved, Cheshire attempted to raise Lian alongside Red Arrow. 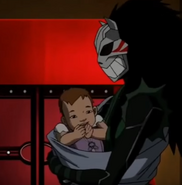 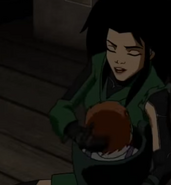