Alola Pokémon League
James is a member of Team Rocket, more specifically part of a trio with Jessie and Meowth, that follows Ash Ketchum and his friends around in the Pokémon anime, usually trying to steal Ash's Pikachu.

As an only child of millionaires, James was forced to endure formal society while growing up. Often having to take part in numerous lessons and activities he had little to no interest in, he eventually began to grow weary of the rules and standards that appeared to be ever-present within the upper-class.

At a young age, he was engaged to a girl named Jessebelle. It was revealed in The Treasure Is All Mine! that he wanted to marry her at some point but he changed his mind after he saw how controlling and overbearing she was. Unable to stand her, he ran away, leaving his lavish lifestyle as well as his beloved pet Growlithe, Growlie, behind.

He then enrolled in Pokémon Tech, a Trainers' school, where he met Jessie, and subsequently failed and dropped out. After this, as revealed in The Bridge Bike Gang, Jessie and James joined a bicycle gang in Sunnytown, where James was known for using training wheels, acquiring the nicknames "Little Jim" and "Trainer James".

Due to conflicts in canon between Kanto and Johto episodes and the special episode Training Daze, what happened between James and Jessie after the bike gang is unknown. What is known, as shown in the special episode, is that they joined Team Rocket separately and were on initially unfriendly terms after being grouped with Meowth but they quickly made up and became good friends.

James made his series debut in the anime in Pokémon Emergency. Alongside Jessie and Meowth, they set their sights on the injured Pokémon in the Viridian Pokémon Center. Sending out their Ekans and Koffing from their Meowth balloon, they quickly overtook the Pokémon Center, which only had three people inside. Before they could steal any of the Pokémon, however, Ash's Pikachu, who teamed up with many other Pikachu in the Pokémon Center, used an electric attack, causing the entire Pokémon Center to explode. It was here that Team Rocket decided to capture Pikachu, deeming him as an exceptionally powerful Pokémon, and made it their goal to capture him.

In the episode Holy Matrimony!, James returned to his home as a result of a trap by his parents, who pretended to be dead in order to get him to come back to the estate, knowing he would return to pay his respects. He suspected that it was a trap, but he ended up being forced into participating by Jessie and Meowth, who wanted the fortune. After the deception was revealed, he was once again subjected to Jessebelle's torment until Growlie came to his rescue. After temporarily chasing Jessebelle away, James soon left his family's manor and as a result declined his inheritance. Growlie stayed behind upon James's request when he returned to Jessie and Meowth.

James went with Jessie and Meowth to Hoenn while they were stuck on the hull of the ship.

In That's Just Swellow, James partook in Crossgate's PokéRinger. He was able to get to the final round with Jessie's Dustox but lost to Ash's Swellow. He was taken by Jessie and Meowth to their balloon in which they reveal the stolen Pokémon. Swellow freed them with Wing Attack and then Team Rocket was sent flying by Pikachu.

In Sweet Baby James, James reunited with his grandparents, Nanny and Pop-Pop. While there, they looked after his sick Chimecho while James got a Mime Jr.

In Off the Unbeaten Path, James along his Team Rocket colleagues participated in Pokémon Orienteering. He was able to win the contest with Mime Jr. Despite winning, James gave the fruit to Ash andhis friends for their actions earlier.

The trio arrived in Sinnoh using their balloon. They arrived in James's vacation house and James retrieved his Carnivine that he caught a long time ago. James left the house with Jessie and Meowth because of Jessebelle's arrival.

In Dressed for Jess Success!, James entered the Lilypad Contest in Jessie's place. In the first round, James had Meowth use his Fury Swipes to cook ramen for the judges, which got them both to the next round. James was able to get to the round and made it to the semi-finals. When he went up against Dawn, he took advantage of the fact that Mamoswine usually started the battle off by swallowing Ice Shard and had Carnivine steal the Ice Shard with Vine Whip before it happened. As a result, Mamoswine became enraged and James was able to win. James went on to the finals and won, earning himself a Ribbon and gave it to Jessie afterwards.

In the Best Wishes series, Jessie, James, and Meowth were sent to the Unova region under orders from Giovanni after they were promoted in Memories are Made of Bliss!. Now wearing black uniforms instead of their previous white ones, Jessie and James, along with Meowth, followed various missions given to them by Giovanni through other people. To prevent them from getting too much attention, Giovanni did not allow their other Pokémon to be sent to them, making them use only Pokémon native to Unova. Unknown to the trio, Giovanni was not certain they would be successful; however, he knew that their presence in the region would force Team Plasma to reveal themselves. In Battling for the Love of Bug-Types!, Jessie and James go back to their white uniforms. The trio seems to be more serious and is much less comedic than before, using thought-out methods of escape, such as jetpacks, and thus has not been sent blasting off in the Best Wishes series. They also appear much less often than in previous series.

In Meloetta and the Undersea Temple! and Unova's Survival Crisis!, he manages to capture Meloetta but was stalled by Cilan, allowing for Meloetta to get away. However, with Meloetta caught by Giovanni, James and Jessie go inside the submarine with Giovanni and Dr. Zager and take them to the Abyssal Ruins for the awakening of the Kami trio located there.

Along with Jessie and Meowth, James reappeared in New Places... Familiar Faces! where he returned to Unova for the first time since their "Operation Tempest" and temporary retreat back to Kanto. He went back to this old ways by catching Pikachu but with a new addition to his team, with James catching an Amoongusssometime before meeting up with Ash and company. In The Dream Continues!, he is forced to give away his Pokémon to Giovanni under the pretense that he captured them for him.

He returned once again in the XY series, following Ash into the Kalos region. There, James captures an Inkay in A Battle of Aerial Mobility!.

The episode Facing the Grand Design focuses highly on the strong bond between James and Inkay. During the episode Inkay was furious whenMalamar showed up with two other evil Malamar, and while Jessie and Meowth believed it was because Inkay wanted to hand them over to the evil Malamar, James knew otherwise, but was still concerned about why Inkay was acting the way it was. Later on after escaping being caught by the evil Malamar along with Meowth, Inkay, and Clemont, James found out through Meowth's translation that Inkay was furious with the evil Malamar for hypnotizing him in the past and wanted to make Malamar pay for what it had done. Inkay then began talking to the forest Inkay and Malamar to try and get them to help with the quest to stop the evil Malamar. At first, the good Malamar were skeptical about Inkay's story until one of the Malamar showed up and attacked the forest Pokémon with Dark Pulse. As the gang worked to stop the evil Malamar, the leader captured Inkay and brainwashed it with Hypnosis and made it attack it's trainer. James took Inkay's Tackle head on and then fed it a croissant, (which is it's favorite food), and began to remember all the time he and Inkay spent together which successfully returned Inkay back to normal. When the group finally defeated the evil Malamar Team Rocket watched the forest Pokémon as the Inkay led James' Inkay into the forest with them. James got up but Inkay went back to him, although at first he told Inkay all he wanted was for it to be happy, so he wasn't going to ask it to stay with him, and Inkay began shouting at James and Meowth translated "THAT'S WHY I'M STAYING WITH YOU! BEING WITH YOU AND THE REST OF TEAM ROCKET MAKES ME HAPPY!" James was overcome with tears of joy after hearing this as he embraced Inkay tightly and happily exclaimed "PLEASE FORGIVE ME FOR NOT UNDERSTANDING THE EVER-LASTING BOND BETWEEN US!"

While he has not accomplished much as a member of Team Rocket, James has proven to be quite skilled at several other pursuits. He has performed well in a few side competitions, even winning a Pokémon Contest. 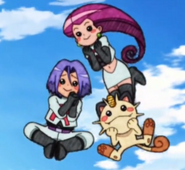 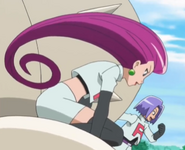 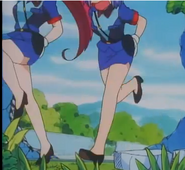 Add a photo to this gallery
Retrieved from "https://xianb.fandom.com/wiki/James?oldid=389409"
Community content is available under CC-BY-SA unless otherwise noted.