A member of the Avengers.

Janet van Dyne's earliest appearance had her and reinforcement agents of S.H.I.E.L.D. arriving to help Hank Pym (Ant-Man) with a group of mercenaries. At this point she could already fly, shrink, and had bioelectric powers; and already possessed her costume. She was relieved that Hank had already dealt with the attackers, but was that disturbed when Hank requested she save a few mercenaries hired by Klaw from being eaten by ants.

Later Jan attempted to talk to Hank as he researched ants when she saw Whirlwind rampaging through the busy streets. She gave chase, and tried to convince the villain to change his way. When he refused she engaged him, before Ant Man distracted Whirlwind with a swarm of termites. Hank attempted to stop her from fighting super villains, causing the two of them to argue. At that point Whirlwind resumed the attack, only for the Wasp to defeat him easily. 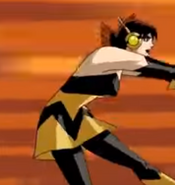 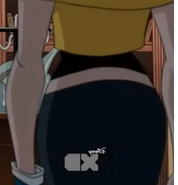 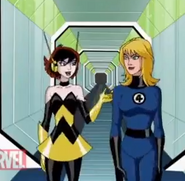 Add a photo to this gallery
Retrieved from "https://xianb.fandom.com/wiki/Janet_van_Dyne_(Wasp)_(Earth-8096)?oldid=303749"
Community content is available under CC-BY-SA unless otherwise noted.