Jasmine "Jazz" Fenton is the oldest, intelligent child of Jack and Maddie Fenton, and the big sister of Danny Fenton.

Danny may have the super powers in his family, but Jazz has the brains and social skills. She started off the show as the intelligent older sibling who immediately berates her parents' "sick obsession" with ghosts as well as often overprotecting Danny to the point of annoyance[1] while viewing herself as the most normal member of the family.

Jazz eventually accepts that ghosts are real, sentient beings when she finds out about Danny's dual identities once she sees him transforming behind the Nasty Burger. Danny, however, is unaware that she has witnessed him transforming and discovered his secret. At first, Jazz tries to question Sam and Tucker, Danny's friends, but she soon realizes that they would not betray Danny's secret. When Danny rescues her by the next day while in ghost form, Jazz pretends to be scared of him and runs away, proclaiming, "He'll tell me when he's ready."[2] As a result, Danny has no clue of his sister's own agenda to continuously cover for him when he's out capturing ghosts.

Jazz gradually changes in her views of ghost hunting when she is forced to accompany her father in barricading their own home, protecting it from a massive ghost invasion (sent by Vlad to murder Jack in "Maternal Instinct"). In spite of her assurance to her dad that ghost hunting is nothing but a social experiment she's trying, she finds herself enjoying it, easily adapting to the Fenton equipments.[4] Jazz eventually embraces her childhood as much as her young adult persona, proving that she doesn't need to be the adult all the time and ultimately creating a balance between the two.[5]

While Danny is reworking a desolate timeline so he wouldn't become Dan Phantom, he learns that Jazz knew about his secret identity when she sent him a note 10 years into the future to inform him about Vlad whereupon Danny recognizes her handwriting and her trademark headband used to secure the note, revealing her knowledge of his secret identity. After defeating Dan, Jazz confesses to Danny, telling him that she's known for a long time, and was waiting for him to reveal his secret on his own terms. Danny and Jazz, in a touching moment, embrace, finally able to get past the secret and reconnect.[6]

Jazz begins to try and take a more active role in Danny's ghost fighting, though as well meaning as she can be, her inexperience results in more than a few embarrassing defeats for Danny, like sucking him into the Fenton Thermos multiple times. Danny eventually loses his temper with her about her unnecessary help, upsetting her. To prove Danny wrong, Jazz ventures to the home of Vlad Masters in hopes of helping Danny out, but ends up forced into combat with Danny. After working together to defeat Plasmius, the two smooth out their conflict, Jazz reverting back to her old method of only helping when she's needed and covering up for him. In gratitude, Danny dubs her a member of Team Phantom, a role she plays more fully when she teams up with Maddie and Sam to defeat Spectra, Ember, and Kitty when they overtook Amity Park.

With her new found love of ghosts, she expresses it as part of her social life, going as far as writing her college entrance thesis on Ghost Envy. At the end of the series, Jazz reveals the truth about Danny's ghost powers to their parents when she thought he was killed in a crash. Later, when he turns up in one piece, she explains to Danny that their parents know. 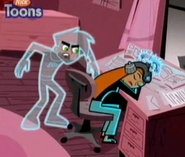 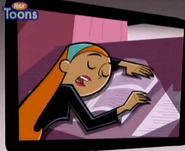 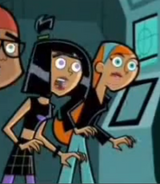 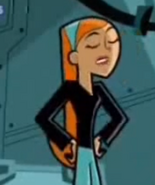 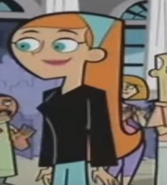 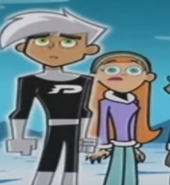