Xianb Wiki
Register
Don't have an account?
Sign In
Advertisement
in: Red Hair, Rick and Morty Universe, Cronenbergs,
and 16 more

A girl in Mortys Math class.

Morty has an obvious crush on her, but Jessica doesn't acknowledge Morty frequently. So far, she has only spoken to him directly once. In the Pilot, when Rick and Morty escape from Intergalactic Customs, the duo crash into her table. Jessica seems impressed and asks Morty on whether he just came through a portal. Rick, however, quickly drags Morty away.

In "M. Night Shaym-Aliens!", a simulation Jessica attempts to seduce Morty in exchange for the recipe for concentrated dark matter.

In the episode "Rick Potion No. 9" Morty wanted to ask her out to the flu season dance, but before she could give him an answer,Brad came up and told Morty that she was out of his league and proceeds to walk off with her (much to her exasperation). She was later seen at the dance and Morty purposely touched her arm with the love potion serum making her fall in love with him, unfortunately she transmitted it (through sneezing) to everyone else in the school building. She was last seen mutated along with everyone else while still under the effects of the love potion in dimension C-137. In the episode "Ricksy Business", Rick and Morty's current dimension, she appears to be normal just like the previous dimensions Jessica was before she was turned into a cronenberg in "Rick Potion No.9". 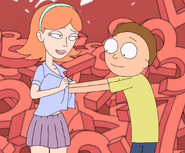 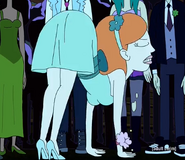 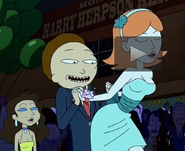 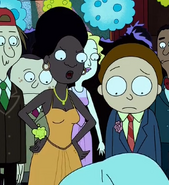 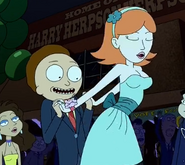 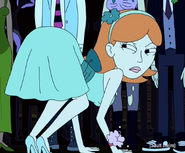 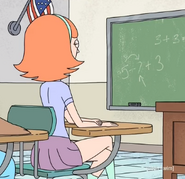