Johanna made her debut appearance in the anime in Following A Maiden's Voyage!. She told Dawn that in order to become a great Pokémon Coordinator, she would have to learn from Trainers and Breeders as well. Later, when Dawn was about to leave for her journey with a large suitcase full of clothes and jewelry, Johanna gave her a small backpack.

In The Bells are Singing!, it was revealed that she sewed Buneary's vest.

As a young girl, she was shown participating in a Pokémon Contest in a flashback in Battling the Generation Gap! against her childhood rival, Lila. It was revealed that Lila was the first person to defeat Johanna, breaking her winning streak. However, after seeing how passionate Johanna was about Contests, she started questioning what she really wanted to do. She sat down to talk to Johanna and the two decided they would pursue what they would be best at, with Johanna competing in Contests and Lila studying to become a Pokémon Stylist.

In Battling a Cute Drama!, Dawn, Ash, and Brock received cold-weather outfits for the area surrounding Snowpoint City from her.

Johanna appeared in Strategy Begins at Home! and met Ash and Brock in person for the first time. Together with Izzy and Cara, she was planning the events of the Twinleaf Festival. She later had a two-on-two Contest Battle with her daughter, using her Glameow and Umbreon against Dawn's Piplup and Pachirisu. Although she won the battle with relative ease, she was impressed by Dawn's teamwork and complimented her.

In Challenging a Towering Figure!, Johanna was the hostess for the battle tournament which was a part of the Twinleaf Festival. She wore a gown during the occasion.

In Teaching the Student Teacher!, Johanna was supposed to have a seminar for children, "My Very First Pokémon Coordinator Class," but she had to fill in for a Nurse Joy who was taking care of too many Pokémon as a judge in the Neighborly Town Contest. Dawn volunteered to teach in her place. At the end of the episode, Johanna gave Dawn a new outfit to wear at the Grand Festival.

She appeared in a brief cameo in Last Call — First Round!, Opposites Interact! and Coming Full-Festival Circle!watching Dawn compete in the Sinnoh Grand Festival, then again in person in A Grand Fight for Winning! in the audience. She also made a cameo appearance in Zoroark: Master of Illusions.

Johanna is an accomplished Pokémon Coordinator, having won the Ribbon Cup and the title of Top Coordinator after winning the Sinnoh Grand Festival when she was younger. Dawn grew up inspired by her achievements and decided to follow in her footsteps, wanting to become a great Coordinator as well. When Dawn left on her journey, Johanna gave her the first Contest Ribbon she received, which both of them carried as a good luck charm.

Johanna watches all of Dawn's Contests on television along with her Glameow. She also has newspaper articles about Dawn's victories and pictures of her competing in Contests and the Hearthome Collection in her living room. Although she keeps track of Dawn's journey, she doesn't like to get too involved, telling Dawn she would be better off relying on her friends and her Pokémon instead of her mother, and to use her losses as a learning opportunity.

While one might think that her skills have gotten rusty since she became a mom, it turns out that she teaches a Coordinator class out of her home, even having a battlefield behind her house for instructing her students. As a result, her skills are still as sharp as ever, as shown when she battled Dawn. 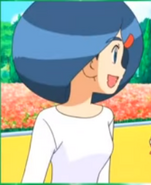