Julia Eugenia Carpenter is a superhero who fights crime asSpider-Woman. She is a part of Force Works.

Little is known about the early life of Julia. At some point she had a daughter she named Rachel.

She went to work at Stark Enterprises as Julia and joined Force Works as Spider-Woman. She had a crush on Tony Stark, the leader of both organizations. However, she was constantly fighting with Scarlet Witch, who also had a crush on him. Force Works spent its time foiling the crimes of The Hand.

When Mandarin discovered Tony's identity, he chose to cover his duality with a marriage to Julia, much to the chagrin of Wanda. However, the Tony was actually a Life Model Decoy. When The Hand attacked, Iron Man appeared and saved "Tony" and Julia. With the ruse a success, Julia was upset that she did not really marry him.

During the Armor Wars, Julia begged him to stop. However, Tony continued.

She was captured by Madame Masque who threatened to kill her in order to get Tony's compliance.

When looking into the missing rings of Mandarin, Julia was accidentally sent back in time. Iron Man and Hulk followed in order to rescue her.

After Mandarin reappeared, Force Works came back to help. After the villain was apparently killed, Julia and Tony finally kissed.

This article is a stub. You can help Marvel Animated Universe Wiki by expanding it.

Spider-Woman was voiced by Casey DeFranco in season one and Jennifer Hale in season two.

Julia's organic webbing is original to the series, borrowed from Spider-Man.

Was injected with spider venom and plant extract that gave her powers. She is also telepathic and can shoot psi-webbing, but not organic.

Took part in the Secret Wars. She was the inspiration of Spider-Man's symbiote costume.

Rachel was kidnapped so Julia was blackmailed into fighting Spider-Man. The two heroes then joined together to rescue Rachel.

Eventually changed her name to Arachne and later became the second Madame Web. 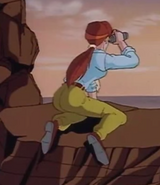 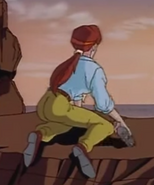 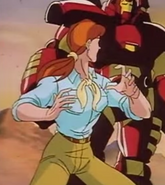 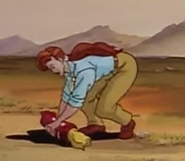