Kamala Khan was born and lived an ordinary life in Jersey City,New Jersey. Her mother and father were Pakistani immigrants and practicing Muslims Muneeba and Yusuf Khan. While Kamala was proud of her heritage and faith, many of her peers used this difference to ostracize and bully her. Kamala found solace from this in her passions for video games, fan fiction, and in particular costumed super heroes. She especially admired the Avengers and Captain Marvel.

One evening, far away from Kamala, the Avengers were battling Ultron in the Inhuman capital city of Attilan. The villainous Ultron had built a weapon designed to kill every being on Earth, but the Black Widow reluctantly switched the death ray for a Terrigen Crystal at the last moment. While Romanova did not approve of the fact that those unaware of their latent Inhuman heritage would suddenly have their entire lives quite literally transformed without their consent or even knowledge, she recognized that it would be their only chance. As a result, Terrigen Mist was dispersed across the entire globe, including Kamala's hometown as the girl was walking home. Kamala began to feel disoriented by the mist's affects before she fell unconscious on the sidewalk and engulfed into her Terrigen cocoon.

When Kamala emerged from her Terrigenesis, she discovered that she had gained shape-shifting abilities. She soon met Inferno, who told her about her Inhuman DNA. Shocked but excited by their new powers, the two teenagers decided to use them to become heroes. Kamala adopted the code name "Ms. Marvel". Inferno soon contacted her again when he discovered a stray robot created by Ultron that was not destroyed during the fight in Attilan. Ms. Marvel was astounded to also find Captain America and Iron Man also fighting the robot. Despite his discomfort with how young the new heroes were, Captain America admired their "moxie" and invited them on a tour of Avengers Tower. Ms. Marvel was exuberant to meet some of her greatest heroes. However, the tower was soon after invaded by Ghost, an enemy of Iron Man's who had also gained powers from the Terrigen wave. Ghost quickly incapacitated and abducted the other Avengers, stole Captain America's shield and Iron Man's armor, jammed every signal in the tower, and sent the roof caving in. The teenagers saved the older heroes but Ghost soon found them again, abducted Inferno and stole Friday, Iron Man's advanced AI system. Now that he had what he came for, Ghost released his hostages and used his powers to phase the ground underneath the tower to bury the heroes alive. Fortunately, Inferno was able to turn himself into a human rocket engine, overcoming gravity and bringing to tower back up. Meanwhile, Ms. Marvel was able to rush Iron Man back to his lab to engineer a way to block Ghost's powers. With the tower back online, Ms. Marvel defeated Ghost for good by repeatedly slapping him with her enlarged hands. Friday was returned to the Avengers, and just as the teens were about to go home, Iron Man admitted that the pair had earned his respect. Captain America told them that they had the potential to be Avengers someday, and gladly took a selfie with them. 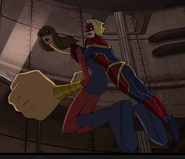 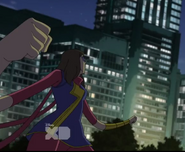 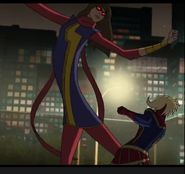