Kana Kimishima (君嶋 加奈, lit. Kimishima Kana) is a disobedient "bad girl" who develops a crush on Shinichi. She has the ability to sense Parasites. Her death leaves a lasting emotional strain on Shinichi.

She has black hair that falls just below her shoulders and often wore a pair of pink ear muffs when out in public. She sported a brown overcoat and black leggings.

She seemed jealous of Satomi due to her feelings for Izumi. She was a calm and care-free person, except for when it came to him. Kana was a determined girl who would often lament over Shinichi's feelings towards Satomi instead of her. She often became embarrassed about her dreams of Shinichi. Kana was extremely stubborn during her crush for Shinichi. Despite his own warnings, Kana continued to pursue him; believing her ability was a gift linking her to Shinichi and only him. She even tried bragging that she could sense him special out of everyone. However, her death was proof that she was wrong.

She was first seen alongside her boyfriend Mitsuo, as they were beating up Nagai. While Mitsuo was beating on Shinichi, she took pity on him, and made him stop. As she was talking to Shinichi, she looked into his eyes, and became frightened from what she saw in them. Mitsuo then calls her to leave, which she does.

After a confrontation between Mitsuo and Shinichi, she later developed feelings for Shinichi and against his words and Mitsuo's curiosity, started following Shinichi around and appearing sporadically in his life. Though Shinichi tried to explain Kana her abilties and what he was; she didn't fully believe him. And still foolishly believed her ability was something that destined her for Shinichi. She died in his arms, attempting to tell him her dream.

Parasite Sensory: Kana has the ability to sense the presence of parasites. An ability, that besides the actual parasites themselves, only one other person has. She often mistook her ability as a message that she and Shinichi were soul mates. Though this often got her into trouble as when she mistook Shimada for Shinichi.

In both the manga and anime, she was shown to practice using her abilities in public, in hopes of sensing Shinichi out from the others. Ultimately, her inability to differentiate between Shinichi and a parasite lead to her death.

As Kana's powers grew, Migi said that Kana was starting to emit a signal of her own that other parasites could sense.

Due to her inexperience of differencing with her power, Kana is at a high risk of danger by running into a parasite instead of Shinichi. 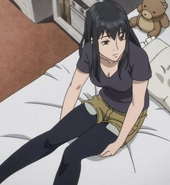 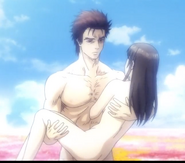 Add a photo to this gallery
Retrieved from "https://xianb.fandom.com/wiki/Kana_Kimishima?oldid=374880"
Community content is available under CC-BY-SA unless otherwise noted.